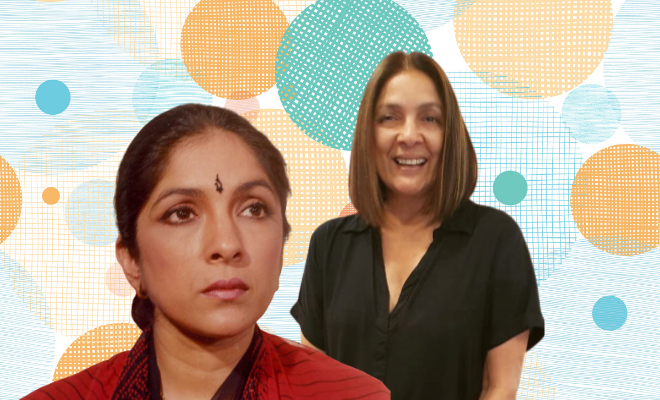 As a journalist, I’ve observed that one of the questions that actors always get asked at film promotion interviews is if they relate to their character. It’s weird, because sometimes the character could be that of a psychotic serial killer, and it would be amusing to see the actor’s utter disbelief at the stupidity of the question! I mean, maybe he/she harbours psychotic tendencies. They’re probably not gonna tell you that, are they? The point is, acting is all about being something you aren’t. You don’t have to have the same traits are your character. Turns out, Bollywood a few decades ago didn’t quite grasp the concept. The brilliant Neena Gupta never got cast in lead roles because of what her public image was. You know, she was a strong woman.

Kyun? Chaunk gaye? Yeah, let this statement tide over you for a bit.

In a recent interview, Neena Gupta talked about how actors have to extra careful about the kind of image they let the media build of the. Because that can sometimes impact the kind of roles that get offered to them. In her case, it was her image of being a strong woman. Turns out, Bollywood couldn’t wrap its head around a strong, independent woman in a heroine’s role. You know, because back in the day, the female leads were all about the sacrifice and compromise for a man’s happiness. Since the media had always portrayed Neenaji as this single mother, who didn’t care about what the society thought of her, how could she fit the role, eh?

“When I say that I had an image of a strong woman, I am referring to the image created by the media. See what I am in my actual personal life, nobody knows. Maybe I am not strong in my personal life. How will anybody know? Now, the heroine in those days was not portrayed as someone strong, more often than not. Generally, she was someone who compromised with the circumstances and sacrificed a lot.”

Neena Gupta further lays the emphasis of maintaining this ‘public image’ on the actor.

“So, I think an actor has to be very careful that what image of theirs is created by the media. And the actor is responsible for it. Like, they should know what he has to say and not say in his interviews. And even if they a few things, where should he/she draw the line? Those days, some of us were quite naive. Kisine kuch achcha bol diya toh usko kuch bata diya. Then, ek baat kahan se kahan chali jaati thi! Matlab kuch aur nikal jaata. If I have certain advantages because I am a public figure, I have certain disadvantages too. I have to learn to maintain decorum with what I say.”

As always, Neenaji is on point with her pearls of wisdom. Of course, I do believe that the media these days has become this uncontrollable monster when it comes to altering facts and appearances. Words and actions of celebrities are rather easily manipulated these days, aren’t they? The technological tools only make it easier for us to uphold or break down someone’s public image in mere minutes.

Luckily for actors, the industry is no longer as restrictive as it was before. And Neena Gupta agrees.

“Hamare yahan (in the film industry), you get roles in tandem with your image. It’s funny. By that logic, shouldn’t doctors be chosen to play doctors and lawyers be brought in to play lawyers? Isn’t an actor supposed to be someone who can do all types of roles? Why should anybody get typecast? Haan, nowadays it’s changing though,”

We’re glad it’s changing because it has opened our eyes to the talents of many a great actors. I mean, look at how Neena Gupta’s career has taken off after she sought out roles through her Instagram post and did movies like Badhaai Ho.

The entertainment industry today recognise the difference between an actor’s personal and professional life. The audience still is a little behind. But at least the industry is trying hard to not typecast people in certain roles. For example, the actors who played Joffrey Baratheon and Ramsey Bolton on Game of Thrones have been vouched by their fellow castmates to be the sweetest guys you’ll ever meet! So clearly, things are a-changing!