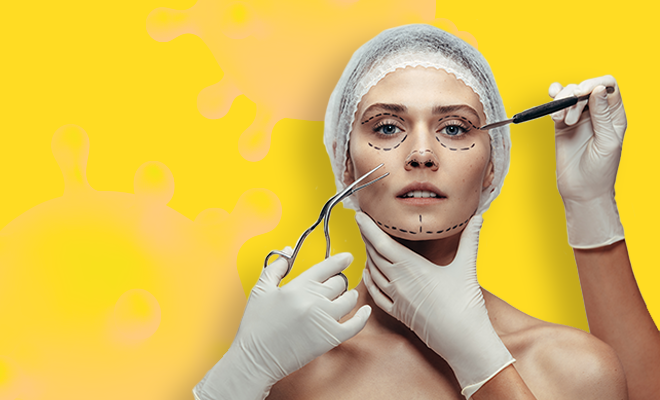 More People Are Opting For Cosmetic Surgery In The Pandemic As Video Calls Stir Up Body Image Issues. This Is Not Good

This pandemic has been a proof that there are two sides to everything. While being locked up in homes, with our social lives shelved for the foreseeable future, it gave us time and opportunity to indulge in some much-needed R&R. Similarly, those long zoom meetings has been equally convenient and stressful. Well, there is one more setback of these online meetings and it is the negative impact on the body image in women. You see, during the lockdown, women were finally embracing their natural skin, ditching makeup and investing in good skincare. However, on the flip side, staring at your face in the cameras in those office meetings has also resulted in digital dysmorphia and it is seriously impacting the self-image issues in women.

According to experts, more people are now opting for cosmetic surgeries like botox, fillers, rhinoplasty, lip augmentation and other corrective procedures. While we were under the impression that showing up raw and natural for those prompt online office meetings was being finally normalised, the impact of the same has been quite the contrary for some people. You ever stared at your selfie which was fairly decent at first but turned ugly after you looked at it for too long? Or you ever discover superficial flaws while looking in the mirror for a while? Well, that’s called dysmorphia and it’s happening to people as they spend a lot of time looking in the front camera during the online meetings on daily basis.

Survey among the members of American Society of Plastic Surgeons and feedbacks from dermatologists have vouched for this. Since people are now looking at themselves for a longer period of time on cameras, they are getting more conscious of their physical appearance and going for surgical procedures in an attempt to enhance their features. This not only affects their mental health but also perpetuates the dissatisfactory body image issues, which is worrying.

Is #Zoom increasing the demand for #PlasticSurgery? According to an article published in “Facial Plastic Surgery & Aesthetic Medicine”, patients are seeking plastic surgery in record numbers, citing their appearance on Zoom amid the #pandemic as a cause: https://t.co/O9mdT9YGHk pic.twitter.com/h1d5G1gevT

Lynn Jeffers, a California-based dermatologist and past president of the plastic surgery organization stated the reason for increased interest of women in the plastic surgery during the pandemic. She said, “There are a few reasons that this might be happening. One of them is the Zoom boom, with all of us on Zoom looking at ourselves. Second, people are taking advantage of working from home and can recover more easily at home and without people knowing that they had a procedure. The third is that people weren’t able to spend their money on travel or entertainment so they have decided to use it for their procedures.”

The situation back home isn’t any different. Women in India have also shown interest in plastic surgery during the pandemic and medical professionals blame it on the long exposure to screens and camera. Plastic surgeon and dermatologist Dr Anant Sinha told in an interview with Times of India, “Initially, we were not aware why so many people wanted to opt for facial surgeries- from the removal of acne and scar marks to reshaping of nose and lips. Later, during counselling sessions, we realised that people were getting conscious about facial appearance while attending online video sessions.”

There has also been a rise in demand for cosmetic eye procedures like eye lift or blepharoplasty, dark circles removal and lash extensions as that’s the only facial feature people can see with the masks on. This is particularly popular among teenagers who attend online classes and people in the 20s. Plus, it’s not just the women who have shown interest in cosmetic and corrective procedures during the lockdown but the craze is equally prominent among young men.

Negative body image issues is not something we signed up for when we moved to the virtual platforms to keep our professional lives functioning. But then again, neither did we sign up for poor mental health, messed up sleep schedule, social inclusion and unimaginable stress. Can we just skip to the post-Covid era and go back to our traditional lifestyle in physical setting, already?

Also Read: Is No Digital Distortion The Answer To All Our Body Image Issues?