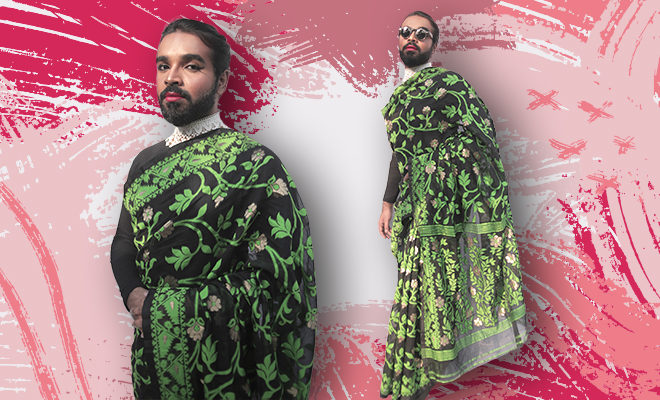 Indian men wearing saree is so funny and ridiculous for so many people. But then, we have all grown watching the same desi men draping a saree unapologetically while trying to sell it to women in the stores when we went shopping with our mom. We don’t find that funny or troll them, but why is a man who wants to express himself with androgynous fashion trolled and bullied? Those men in saree shops and every guy who thinks his masculinity isn’t hurt by wrapping a six yard fabric on their body, or any clothing conventionally meant for women for that matter, are breaking these gender norms in true sense. A lot of male influencers on Instagram are also nailing androgynous fashion, despite online hate they receive on a daily basis. Some of them are doing it in an epic way.

We are talking about Pushpak Sen (@thebongmunda) who posts bomb pictures of creative makeup that he tries out regularly and impeccably stylish outfits. On the occasion of Bengali New Year, he put up a picture in a saree and makeup with  a caption that could shut the trolls before they could even spew hate on his post. He wrote, “Causually wore a sari, doused myself in makeup, clicked pictures, YET while peeing after the photo shoot, I found my dick perfectly in place and in perfect condition. [sic]” Okay, that’s hilarious. Sen is probably used to the trolls questioning his masculinity whenever he posts selfies in makeup or jewellery but he knows how to kill ‘em with kindness, or in this case, a sassy caption.

Also Read: Irrfan Khan’s Son Babil Shuts Down Trolls Who Ridiculed Him For Using Face Masks And Makeup. Everyone Needs To Hear This

Sen’s Instagram feed is a haven for any makeup lover and fashion enthusiast. From wearing flowers in his hair, to wearing earrings, nose ring and a bindi, he has smashed the gender stereotypes prescribed to men from childhood. Although his style is pretty interesting and experimental, he seldom rocks androgynous fashion. However, with this saree post, he made a strong case for androgynous fashion and affirmed that men can wear whatever the hell they want without their manliness being challenged. In fact, men who are comfortable in women’s clothing as much as they are in menswear are real men, regardless of their sexual orientation or preference. Also, did you see that perfect wing flick?

This judgement doesn’t only happen to any specific gender, TBH. While men are mocked for wearing makeup or saree, women are slut-shamed for wearing a lot of makeup and literally anything they choose to wear. Sen has also been vocal about how people think it’s okay to judge others on the basis of the choice of their clothes and makeup and define their character. A few months ago, he posted a picture wearing and holding a red lipstick to defend his mother who was slut-shamed for wearing the bold lip colour. He wrote a long message as his caption for everyone who makes quick judgements about older women who sport red lips. He wrote, “Here I am, a man with a full face of beard and a red lipstick. Here I am, standing up for all the mothers, sisters, daughters, non males and all the womxn who have had to suppress their desires because of the toxicity of an insecure society. Here I am, standing up for all of them and asking my fellow brothers to stand up for the womxn you know, in your own way, when you see your loved ones getting bullied. [sic]”

The best thing about this whole gesture is that he sent this photo to those relatives wishing them good morning and a ‘get well soon’ which was basically a metaphor for ‘recover from this sick mentality’. We love how he stands up for makeup lovers, breaks fashion norms and makes a statement with every gorgeous picture he posts.