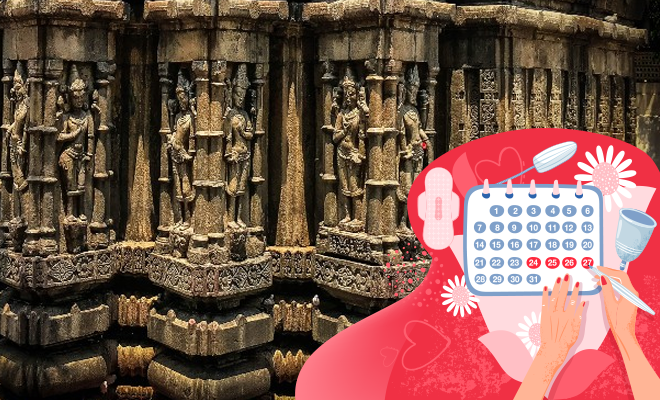 A Temple In Assam Worships The Menstruating Goddess’ Vagina. So Women Only Get Respect When They’re Divine?

Before I delve into the story of the Kamakhya Temple in Assam, here’s a disclaimer. This one’s going to be full of irony. Let’s begin with the first one. Childbirth is often described as one of the most beautiful miracles God’s created. And motherhood? I don’t think we’re done waxing poetic about how ‘amazing’ the feeling is to become a mother. It’s like our favourite sales pitch to every woman who says she doesn’t want a child. “Arre but motherhood is so beautiful! You’ll realise once you become a mom how incomplete a woman is without it!” Okay, boomer. But when it comes to menstruation, we see red. Literally. It’s supposed to be impure. Dirty. Warrants segregation. Turns women into untouchables and binds them in rules. The very biological process that is needed to get to this ‘wonderrrrrful’ motherhood you talk about, is looked down upon. Bleeding vagina? Eugh. Taboo.

Can we applaud this genius?

No wait, it gets better. You really want to believe the world’s fighting this regression. We’re getting mainstream actors working in movies about menstruation and sanitary napkins. A documentary about periods wins an Oscar. Actresses are openly talking about menstruation and PCOS. We’re getting sanitary napkin dispensers in schools and colleges, and free ones distributed to women in states like Haryana for an entire year. Scotland just became the first nation to make sanitary napkins free for women who need them. Clearly, there’s progress, right? RIGHT?

Meh. Because even now, you try talking about period leaves, and people will seize up. Men, because, “Yaar, feminism toh equality hota hai na? Then why should they get more leaves and I do extra work?” And women, because, “Are you kidding me? Period leaves are anti-feminist. You’re ruining everything we fought for because taking a period leave means admitting weakness. And then how will we prove we’re equal to men, haan?”

And that’s just the education, urban population, who is supposed to have watched all the movies, attended all the Sex Education classes and had enough access to resources that tell them that menstruation is the most natural thing for women. In rural areas, the situation is still as worse, perhaps even more than we think.

Amidst all this regression is the Maa Kamakhya Devalaya in Guwahati, Assam. It worships a menstruating goddess. More specifically, the object of said worship is not an idol but Maa Kamakhya’s ‘yoni’ or ‘vagina’, situated in the sanctum sanctorum of the temple.

The story of Maa Kamakhya and her temple

The temple is one of the oldest of the 51 Shakti Peeths. In the Hindu tradition of the worship of Shakti (the Goddess), the Shakti Peethas are important shrines of worship. The story behind the Kamakhya temple goes thus: Once Goddess Shakti wanted to attend a yagna being conducted by her father. Her husband, Lord Shiva disapproved, and was further insulted because her father didn’t invite her husband for the yagna. Enraged, she committed suicide. Shiva, besides himself with the death of his wife, placed her body on his shoulders and began the dance of destruction, called tandav. To calm him down. Lord Vishnu sent his Sudarshana Chakra to cut Sati’s body. Parts of her body then fell at 108 different places on Earth, which later on came to be known as Shakti Peeths. Kamakhya Temple is where Goddess Sati’s vulva and womb fell.

The Kamakhya temple complex houses other temples too, and the garbhagrihas of all of them are shaped like the walls of a vagina closing in. They’re below ground level, and look like a yoni-shaped stone, filled with water.

The menstruation bit again has multiple reasons. As you know, every year, during the monsoons, the Brahmaputra river floods tremendously. The iron-rich soil and silt that it carries along turns its waters red. It is thus believed that the Goddess Kamakhya goes through her annual menstruation cycle during this time. To mark this occasion, a yearly festival, called the Ambubachi Mela, is also held in the temple.

During the first three days of this festival, the temple remains closed because, well, the goddess is menstruating so the earth becomes unclean. I know, I know, what you’re going to say. Again with the impurity. But theek hai, moving on. These three days, the devotees are also forbidden from doing a lot of things like cooking, performing puja, farming and so on. On the fourth day, the Goddess is bathed, rituals performed, and the temple is open for devotees to get her blessings. The prashaad is two-fold—water from the stream that keeps the temple stone moist and a piece of red cloth that covers the stone during these days of menstruation.

This begs a very deep question, so stay with me on this. Why do we only respect something when it is divine or has a God filter on? Normal women? No, we’ll abuse them, rape them, oppress them, call them ‘weaker sex’, and gaslight them for millennia. But Goddess? OMG, Devi! Saint! Angel! Shakti! Mother! Let me worship you and the incredible power you have? I will fight for your honour! I will build temples for you! Kill in your name! I will spend my money to adorn you gold and exquisite silks! Because you are my God’s consort. His equal. Even he agrees you have so much power. We can’t even take his name before taking yours in the same breath first!

Sigh. If a temple can worship a menstruating goddess and if a goddess’ vagina can be so powerful that it merits a temple complex of its own, then what’s stopping us from acknowledging real, living women for the people they are? She doesn’t need to be a goddess to get that from you.

So recently, and I cannot believe I am writing this, two Netflix executives were booked because of a complaint against Mira Nair’s A Suitable Boy adaptation, for showing a Hindu-Muslim couple kissing in a temple premise. Even before the cops acted on the complaint, when a young, enthu BJP leader and the Madhya Pradesh Home Minister were talking about this ‘issue’, people on Twitter pointed out how our very own Indian temples, like the Khajuraho temple or the Ajanta Ellora temples have statues depicting lovemaking. We wrote the Kamasutra for crying out loud. Then why the outrage? Unfortunately, in our country, while we may obsess over building temples and protecting their honour, we don’t give two cares about what the temples are actually trying to teach us.

Also Read: Moral Police Now Wants Us To Boycott Netflix Over ‘A Suitable Boy’. Can Y’all Just Stop Telling Us What To Do?