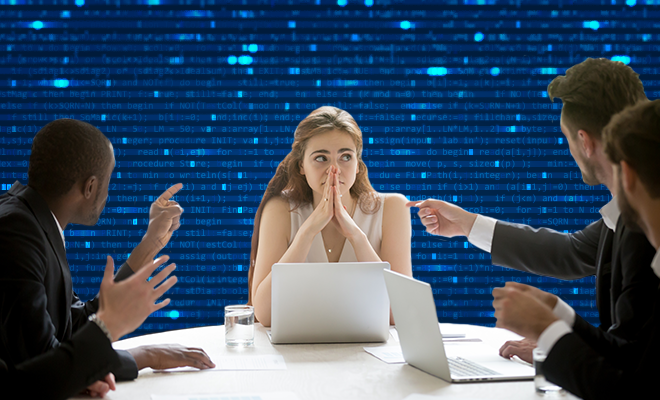 I’ve learnt to respect every woman’s choice, whether she chooses to work or be a homemaker or simply pursue other interests non-professionally. But can I just say this (without any malcontent towards others) that I respect the hell out of working women? Mostly because the environment and industry is so goddamn rigged against them due to gender bias. And that’s why when they get a good job, or a promotion or awards, or expand their businesses, it’s just a different sense of pride, you know? And now, having heard that something as basic as a job recruitment algorithm could actually thwart women’s professional dreams due to an unconscious gender bias, I’m probably even more proud of women who land the jobs they want.

Yep, even a measly algorithm. And no, this isn’t a baseless claim being thrown around because some woman lost a job to a man, as haters would say. A new study by the University of Melbourne says that algorithms which are used by job recruitment websites are more likely to choose men over qualified woman applicants for jobs. Most of these job search sites use Artificial Intelligence (AI) to find the right bunch of candidates suitable for the job. But even AI can’t seem to escape unconscious gender bias, and ends up picking male over female candidates.

What was this gender bias in job recruitment study about?

In the study, funded by Unibank, forty students with masters and post-graduate degrees and some recruitment experience were give CVs of real-life candidates who were applying for jobs at Unibank. The applications were for three roles—data analyst, finance officer, and recruitment officer. Now according to the Australian Bureau of Statistics, each of these three positions are male-dominated, gender-balanced and female-dominated, respectively. Makes sense, since this means we’re covering a level playground. Furthermore, half of the sample size was given CVs with the applicants’ gender flipped.

Each recruiter in the study was asked to rank the candidates by making lists each for top three and bottom three CVs for each position. They were also asked, during the course of their task, to list keywords and relevant experience that they were looking for in each CV. This data was then used to generate an algorithm that would eventually search for the best candidates.

What were the study’s results?

There were two responses that had to be compared to arrive at the final results of the study. One was that of the recruiters who were part of the sample for the study. The second part, of course, was the algorithm-generated candidate CVs.

Now, it was found that when it came to human recruiters, they seemed to choose male candidates over female ones. They all ranked men’s CVs higher and women’s lower for each of the three jobs. Yep, even for the job that was generally a female-dominated space.

The steepest difference was seen in the ranking for the position of a finance officer, which, let me remind you, has been deemed a gender-balanced role by the Bureau. The panel of recruiters preferred men for this role, and ranked them four points higher than women, irrespective of academic qualifications, relevant work experience and relevant keywords.

“This means there is something distinct about the men’s resumes that made our panel rank them higher, beyond experience, qualification and education. This forms the most alarming dimension of gender bias, as we are not capturing what gives men the edge in these positions.”

Considering the algorithm was also written based on these panelists keyword searches and approach, it also exhibited unconscious gender bias by picked men as having more relevant experience than women. As study author Leah Ruppanner explained it, women do tend to have lesser experience on occasion, maybe because they take time off for maternity caregiving or other gender-based reasons. And that might be why the algorithm pushes men further up. This is, of course, an unconscious bias, but it is undisputedly a huge detriment to women’s employment if the bias isn’t checked.

Who makes those job recruitment algorithms? Humans do. And we have a set archetype for certain job roles in our heads. Turns out, it’s like a whole list of boxes that men’s CVs tend to check more frequently than men. So while companies might say things like ‘diversity in hiring’ and ‘period leaves or maternity leaves for women’, the unconscious bias does exist and eventually hurts their CV.

How does this get resolved?

A spokesperson for one international job search website, SEEK, has talked about it and was quoted in the study suggesting a possible trick that can be used to help eliminate the gender bias in the algorithm.

“Potential exists for artificial intelligence to detect and embed discriminatory bias in human behaviour. Conversely, there is opportunity to remove explicit bias signals in data to generate more equitable outcomes. One example of this is the removal of names (which can often infer someone’s ethnicity or gender) from resumes before they are used in models generating artificial intelligence.”

In a time when more and more women are getting conscious about acknowledging their gender differences from fear of not being treated as equals, the results of this study are worrying. If the game’s already rigged against women, things just got more difficult.

Also Read: Barkha Dutt Says Period Leaves Make Women Seem Weak. Raise Your Hand If You Looked Up To Her And Are Now Disappointed