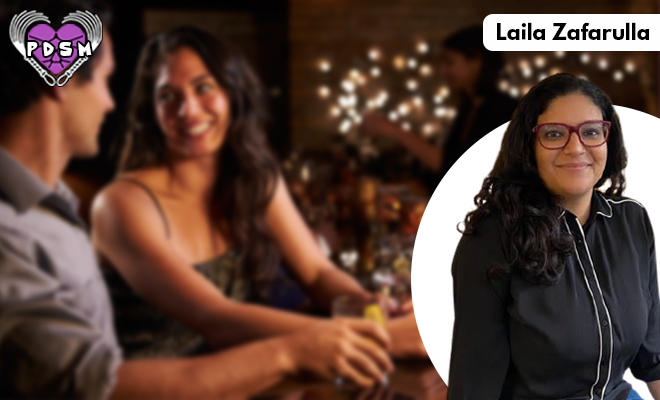 As PDSMs (post divorce single mom), the shots fired at us come from not only the society and the people that comprise it but also from deep within the folds of our own conditioned minds.

On the one hand, not only does society and Desi culture deem us as persona non grata but even in our own minds, we make ourselves feel like utterly outdated dinosaurs trying to manoeuvre spaces comfortably occupied by the younger and better-looking women. We feel like a fossil in this modern-day age of dating and sometimes, it’s entirely our own doing.

To make this PDSM dating journey even more excruciating, we now also come with the not-so-desirable baggage of a child.Throw in a dash of a lack of privacy, lots of insecurity and trust issues, lack of babysitting options, and nosy neighbours, and we have the masala curry that makes up the landscape of the dating scenario of single parents, and more importantly, single moms.

And let me tell you, this landscape is fraught with more constant flops than of all the Khans in the last five alone put together (Yes, it is that bad.)

Let’s liken this PDSM dating game to a Chemistry class, and start by understanding the many errors that we make while re-entering the dating scene (AKA Tinder) which seems to have completely changed since we were out there doing our thing.

ALSO READ: Hauterfly’s Post Divorce Single Mom (PDSM Expert) On Things She Wishes Her Parents Had Told Her Before She Got Married

Not having enough boundaries has often been the death-blow on a PDSM’s dating life as it sees her going through loops of the same abuse and toxicity that she just escaped in her marriage.

While it is perfectly normal to want to take time out from relationships and dating, after the end of a relationship, making that time out to be decades long is only going to jeopardise all chances you have at feeling your heart flutter again. Plus, crying over the spilt milk that is our marriage for that long is like putting yourself in jail and throwing away the key.

Also, as PDSMs, we tend to get a little too comfortable with our independence, closet space and routines, all of which are definitely hard won, but when we get too comfortable, we tend devalue the importance of having a companion to share these things with.

As we all know, there is already a lot of shame and guilt associated with having or wanting sex in general within the construct of our beloved culture, which pushes the monogamous married card for as long as it can. So you can imagine the state of a PDSM, who still wants to have sex (a lot), but does not want to get married again to be able to have it.

It’s a real catch-22, but pandering to this societal shame and sitting at home like a banished Rapunzel remains one of the biggest mistakes a PDSM can make while venturing out.

4. So, Is it just sex or is it a happily ever-after you are looking for?

The inability to disengage sex from a happily ever-after remains a perennial dating issue with PDSMs. This could be due to point 3, but it is also rooted in the fairy tales that we have been fed since our childhood.

The idea that a prince will come to save us (and now our kids, as well) still remains in our beating hearts, and we still want to hear an I-love-you as soon as we cross paths with any male, although deep down we know that Mr. hot-abs is only good for a one-night-stand and is definitely not a potential ‘I do’. This lack of clarity on what we need and from who we need it from remains a huge dating mistake that PDSMs keep making.

PDSMs, whatever your reasons for dating all over the place might be, check yourself first by asking yourself the all-important question of whether you are undoubtedly free from the trauma and the memories of your ex and divorce before latching on to any Tom, Dick and Harry that crosses your Tinder path.

Are you able to function for days on end without having a breakdown, or do people still cross the street when they see you to avoid your spewing rage? Do you feel normal and grounded within yourself again?

And if your answer to any of that was No, consider that to be an extension on your single days until it turns into a big, resounding yes!