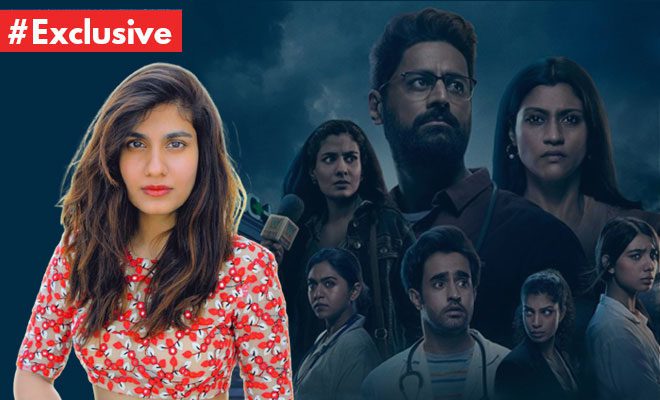 Exclusive: Shreya Dhanwanthary On Playing A Reporter In ‘Mumbai Diaries 26/11’, Her Twitter Popularity, And More

There are some personal moments in all of our lives that are forever etched in our memory. And then, there are some moments that we share with a bunch of people, that leave an impact on our collective psyche. As a country, the 26/11 terror attacks in Mumbai were one such event that we’ll never forget. There were those who sat glued to their television screens, watching this horrific tragedy unfold in different locations in Mumbai. And there were those who were there, either on the periphery of all the action or unfortunate to be living it. The nightmare felt more real for some more than others, but it was a nightmare nonetheless. Over the years, many writers, artists, and filmmakers have tried to tell stories, real and fictional about this night. And Mumbai Diaries 26/11, a new series arriving soon on Amazon Prime Video, does the same, albeit with a whole new perspective. It’s a medical drama that stars Konkona Sen Sharma, Mohit Raina, Shreya Dhanwanthary, Satyajeet Dubey, Natasha Bharadwaj, Mrunmayee Deshpande and Prakash Belawadi, and is jointly directed by Nikhil Advani and Nikhil Gonsalves.

So what’s this new perspective, you ask? Well, for the first time ever, we get to imagine what the night would’ve looked like for the medical workers—doctors, nurses, healthcare workers in the nearby hospitals—who had to put all their emotions aside and attend to the injured victims of the 26/11 attacks. According to the Mumbai Diaries 26/11 trailer, the series is set in a fictional Bombay Hospital, where a team of doctors, both experienced and fresh interns, has to take charge and do their duty, in the face of fear, anxiety, even pain and loss. It’s a dramatised version of the night, but definitely a different side of the story that is being explored in the series.

And if there’s a story, there’s bound to be someone finding it, and telling it. In Mumbai Diaries, that task is in the able hands of Mansi Hirani, who is a field reporter covering the events that transpired on the fateful night of 26/11, when Mumbai was under siege. Mansi is played by Shreya Dhanwanthary, who stirred up quite the storm with her stint as financial journalist Sucheta Dalal in the breakout series Scam 1992.

Since Shreya’s onscreen reporter stint and my IRL media role makes us somewhat journalist bros (kidding, but come on!), we had a nice little chat about Mumbai Diaries. I also couldn’t let the chance slip to ask her about her Twitter fame—she’s hilarious—and her dabbling in everything from before the camera and even behind it!

Q: What sets Mumbai Diaries 26/11 apart from other films or shows that have told the same story?

Shreya: I know this subject has been done before. But there has not been a focus on telling the story from the viewpoint of the doctors working that night, or the hospital workers. I think it’ll be something else entirely for people to see that.

A: It was amazing working with the entire cast. Because fun fact—and this isn’t a spoiler so I can tell you—my character is the only one that that interacts with every other character in the show. There are many characters who don’t ever interact with each other. But my character gets to do that, or at least be in the same scene with every single character from the show, which is pretty badass I think!

My next question was about her playing a mediaperson again on screen, and Shreya, in mock anger, reminded me that her Scam 1992 character was a financial journalist, while Mansi Hirani is a field reporter! Gotcha!

Q: Does filming an intense series like Mumbai Diaries 26/11 take a toll on you? As an actor, what is your process of slipping into and out of a character?

A: I actually don’t know how to talk about processes and stuff, because it is quite a personal thing. I feel like all the prep that you have to do as an actor happens before someone calls ‘Action!’. And after that, the magic and everything that needs to happen, should happen between the space of ‘Action’ and ‘Cut’. I don’t take my baggage back home. Someday, maybe I will, but hopefully not.

The thing is I really love cinema. I love acting; I love being able to tell stories. Plus, I’m very realistic and practical about it, thanks, to my dear family, who reminds me to be that way. So, let me just say that I leave it all on the screen. I take nothing back home.

Q: I follow you on Twitter and you’ve cultivated for yourselves this Twitter personality who can be entertaining but at the same time, unafraid to call people out on their crap. What’s it like being a Twitter celeb? Are you not bothered by the trolls that would come for you?

Me: <writing the script of Lagaan in one message>

A: *laughs* This is a new thing that’s happening to me! I tend to make a lot of jokes on Twitter which people seem to enjoy. People come up to me and say, “It’s so nice to meet you. Your Twitter is so funny!” That’s never happened before. It’s cool and it helps to not take anything seriously, I guess.

Q: You were an engineering student, a Miss India finalist. You are an actor now, a published writer, and with Viral Wedding, you’ve even written and directed a web series. What’s the next frontier that Shreya Dhanwanthary plans to conquer now?

A: Maybe I should to win some medals for India at the Olympics now? *laughs* I’m kidding! Let me be a good actor and get my fill of acting. And then, who knows? Maybe I’ll actually go and represent India!

Q: Do you have any more plans to take up some more writing or even directing your own feature film?

A: I do eventually want to build up to that eventually, because I do write. I have been writing for quite some time. But I want to fulfil my greedy actor needs and work with great directors. And then I’ll steal one of them to do my feature film!

Q: Scam 1992 really exploded, and we now hear you’ve a film coming up with R Balki. It sounds exciting! Do you have a dream role/favourite genre as such?

A: Honestly, for me, it’s not so much about the role, or to be saying that this particular one is my dream role. Hopefully, it hasn’t been written yet.

Normally, I’d be keeping this a bit on the down low but OMG! Is it cool if I myself am hella kicked about this? I mean… R Balki!!! Sunny Deol!! Pooja Bhatt! Dulquer Salmaan!!! 😭😭😭🥳🥳🥳 @PoojaB1972 @iamsunnydeol @dulQuer pic.twitter.com/llWJJLQsAm

Q: What do you hope the audience takes away from Mumbai Diaries 26/11?

A: I hope it reminds us that people have kindness and good in them. Things tend to get dark, and it’s good to have a reminder of that once in a while.

‘Shershaah’ Review: A Surprisingly Subdued Tribute To A War Hero And His Two Loves That Should’ve Been So Much More