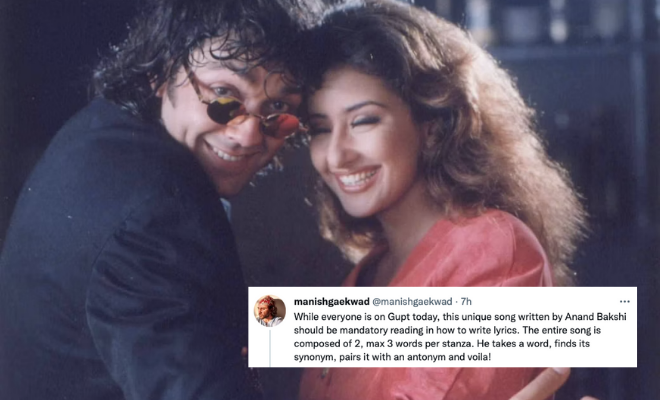 Author Manish Gaekwad Shares An Interesting BTS Incident From ‘Gupt: The Hidden Truth’ And It Has A Kanda Connection

July 4, 2022 marks 25 years of the 1997 Hindi-language thriller film Gupt: The Hidden Truth. Directed by Rajiv Rai, the film stars Bobby Deol, Manisha Koirala, Kajol, Om Puri, Raj Babbar and Kulbhushan Kharbanda. It also stars Paresh Rawal, Dalip Tahil, Prem Chopra, Sadashiv Amrapurkar, Sharat Saxena, Mukesh Rishi, and Priya Tendulkar in supporting roles. While this film is considered to be one of the best thriller films of B-town, the music from the film has always been most talked about for various reasons. But did you know Bobby Deol had a tough time getting romantic with Manisha Koirala for the song ‘Mushkil Bada Yeh Pyar Hai’? Author and writer Manish Gaekwad took to Twitter to share a thread about this song from the film. He also shared how the lyrics written by Anand Bakshi are unique.

Composed by Viju Shah under the banner of Tips Official, ‘Mushkil Bada Yeh Pyaar Hai’ was sung by Alka Yagnik and Udit Narayan. Making an interesting observation, Manish Gaekwad shared that the entire song is composed of 2 to 3 words per stanza adding that the lyricist Anand Bakshi took a word, found its synonym and paired it with an antonym for the song. Now, the thing that makes this song even more unique is the fact that most songs usually start with a (mukhda/refrain) followed by the antara (stanza) followed by the mukhda again. But if you look at the lyrics of the song, it starts with the antara that is followed by the refrain. Confused? Okay, in simpler words, Anand Bakshi actually decided to change the format itself, rearranging the order in which the lyrics are generally written for a tune. Going along with Viju Shah’s equally new, style of music that did not follow a set template of melody and rhythm. Manish Gaekwad further shared that the lyricist used a demonstrative determiner ‘ye’ in the 5th stanza of the song.

Ye is a demonstrative determiner. The first 4 stanzas don't use Ye in the beginning, only in the middle to specify.

The author also revealed that the song from Gupt: The Hidden Truth was shot at Kerala’s Periyar Lake by Ashok Mehta. Manish Gaekwad went on to share a fun fact about the music of the song. He shared that the intro is actually copied and was previously used in the film Exorcist. Well, no wonder Bobby Deol passed out in the song or maybe it was the onions. Coming to the onions, the author further shared an interesting incident which was revealed by Bobby Deol in an interview in the past. In an interview, the actor said that he had a tough time getting romantic with Manisha Koirala during the shoot of the song as she came to the set after eating onions with chole and she had to bite him for a scene and all he could think about was “How can I get romantic with her after smelling onions on her breath?”.

Fun fact: The intro music is copied from here, also used in the film Exorcist.https://t.co/N2WpRrhfly

Also I remember once reading an interview where Bobby Deol said he had a tough time getting cosy with Manisha Koirala for this song as she had just munched on a plate of onion snacks before the shoot. Explains why he looks passed out when she does the sherni growl. pic.twitter.com/xhfKOJjdW9

FYI, Bobby Deol had also shared that he had broken his leg at the time of shooting a song for Gupt: The Hidden Truth and couldn’t dance and was left to only do hand movements. Chalo ab jao, Gupt dekho! It’s streaming on Zee5.