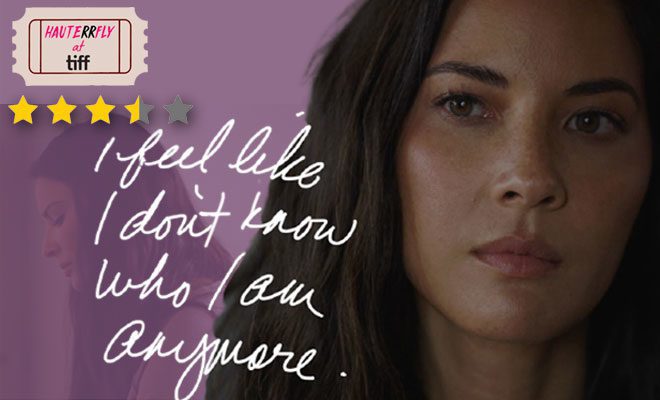 I was hugely disappointed with myself when I missed watching Violet when it premiered at a few other film festivals earlier in the year. You could say, there was this voice in my head that told me my time management skills were shit, and that I was going to have major FOMO over this. We all this voice that is our internal cheerleader, but often its encouragement is drowned by another voice in our heads, the mean girl who triggers self-doubt and anxiety by telling us we’re never going to be enough. Violet, the debut feature from American actor-writer-director Justine Bateman starring Olivia Munn, uses refreshing techniques to unearth these very fears, and finding a way to overcome them through the journey of its lead. It’s powered and enhanced by Munn’s very layered performance, and the result is a film that is an incisive in the unpacking of its lead’s psyche and extremely relatable.

Olivia Munn plays the eponymous Violet Calder, an executive working with a leading film studio in Los Angeles. She’s a hard worker, and has carved quite the niche for herself in an industry that is otherwise dominated by white alpha males. At work, she is almost the second-in-command. But she ends up second guessing certain things, while trying hard to not ‘be a bitch’ to her  subordinates, as the nagging voice in her head holds her back. Thus, her toxic studio head boss (Dennis Boutsikaris) and her team take advantage of her ‘niceness’ and non-confrontational behaviour all the time. 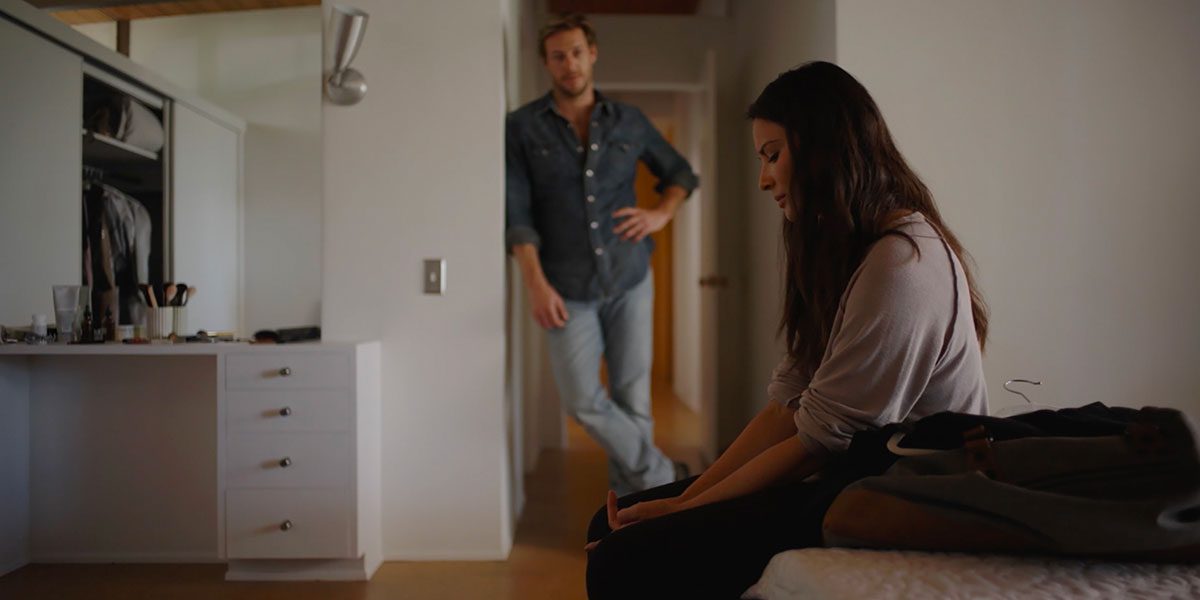 Violet is living with her childhood best friend, Red (Luke Bracey), as a temporary arrangement. There are clearly things unspoken between them. But ‘The Committee’ in Violet’s head, which is what she calls that self-doubting voice, keeps telling her she’ll ruin it if she ever lets him know the full extent of what she is feeling. Even with her friend Lila (Erica Ash), there are moments of vulnerability when Violet almost lets her guard down, but the snap back is so fast that she’s scared it might be driving these people away.

On the outside, Violet is a cool, calm, composed, smart and beautiful woman. Coveted, both professionally and personally. You’d think she’s got it all, how easy and dreamy her life would be. What could she be afraid of.  And yet, her self-doubt and anxiety triggered by that voice in her head puts her down every time, and she then ends up self-sabotaging her own efforts to break the cycle. Until, something changes….

Director Justine Bateman employs two very unique narrative techniques to depict what’s going on inside Violet’s head. For one, ‘The Voice’ is Justin Theroux. In an interview, Bateman revealed her reasoning for this—she wanted the voice to feel like it was something external, belonging to someone else, not a part of Violet herself, because that’s how people who deal with crippling self-doubt often feel like when they hear the voice in their head tell them they can’t do something. Bateman chose Theroux, whose voice was on the other end of the spectrum compared to Olivia Munn’s and it was a different sex too.

Did it work? For the first few instances, I legit thought this was the voice of Violet’s father, brother, or some ex that was enshrined in her head forever, constantly making her feel unworthy and incapable. I thought it was a clever move. Besides, I do think that women tell women’s stories with much more nuance, and Bateman seems to capture a very specific type of self-doubt and anxiety that most women harbour, often because they’re told by men of what they can and cannot do. Think of the voice in Violet’s head as a troll, who every time you try to put your work out in the world, drops nasty comments on your post to tell you you’re a failure, a bitch, not worth it, and you should go die or something because everyone hates you.

The other technique employed by Justine Bateman were cursive scrawls on the screen, which told us what Violet was exactly feeling. The voice in her head would be asking her to not be a bitch to her junior and just agree to whatever he asks, and Violet might actually give in to it and do just that. But the scrawls would tell a different story, of what she really wanted. When the film progresses and Violet starts doing what she wants, the voice gets antsier, thereby building considerable tension. Another thing that Bateman slips into to the narrative, with help from editor Jay Friedkin, are shots of some really dark, decaying things, offering a much deeper look into the dark places in Violet’s psyche where she might be withdrawing into every time she gives into the voice. 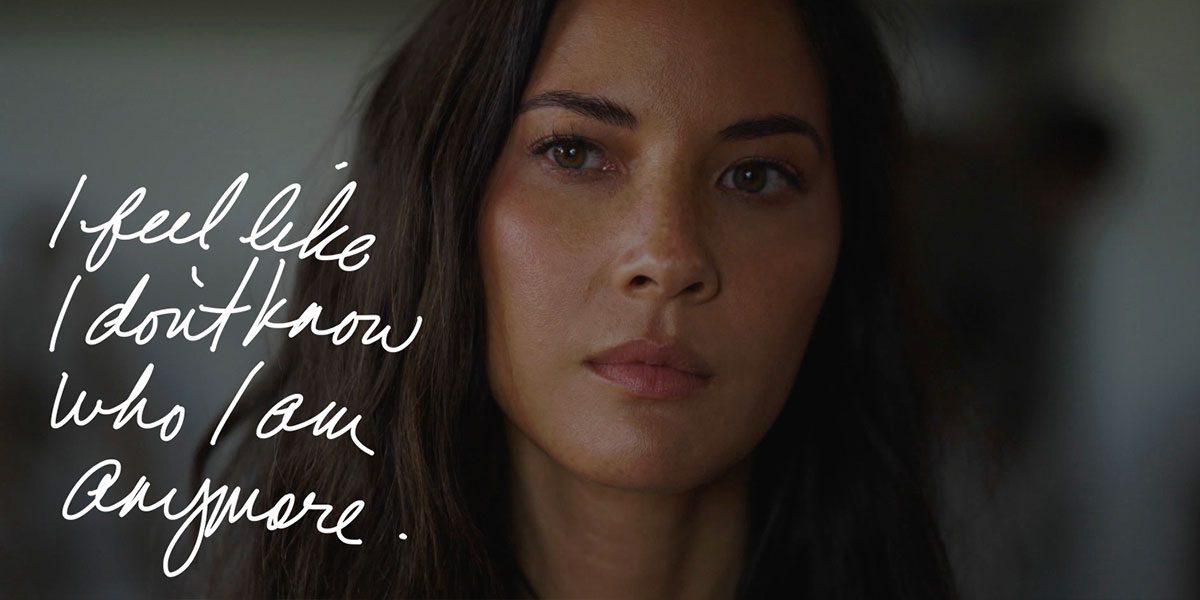 But for the most part, it is Olivia Munn who puts forth such a layered performance as Violet, letting her expressions and restrained body language to all the talking. You pay attention to that and you might not even need to refer to the text appearing on your screen which takes some getting used to at first. Munn’s performance truly elevates what the film is trying to sell, and makes it relatable as well as shattering the illusion that the people who seem to lead interesting lives and look happy on the outside might actually be harbouring incredible turmoil within. It could happen to anyone.

In the end, the film thankfully doesn’t give some magical, all-well solution to problems. But instead proposes empathy for someone in a similar situation, and indicates that it’s with the right kind of support system, no matter how crippling and how chronic your self-doubt and fears are, you can begin overcoming it with tiny steps, like Violet did.

Verdict: Violet is really all of us

I really wonder if the names of the two important people in Violet’s life are Red and Lila (lilac) for a reason? For that matter, the colour violet has been associated with both ambiguity and individualism.  Anyhoo….

Violet is an extremely relatable film because in this time and age, so many of us are plagued by self-doubt. The imposter syndrome, we call it, and it makes us feel like frauds who are not worthy of the life we’re living, the love we get or the job we hold. We all have that tiny voice in our heads that can get louder if we let it, and sometimes drown out genuine appreciation and love or concern coming from our loved ones. Filmmaker Justine Bateman manages to incisively portray the inner tumult of her lead while Olivia Munn takes care of the serene yet subtly vulnerable exterior.

Definitely worth watching because we’re all battling pretty much the same demons on the inside, while pretending to be cool cats on the outside.