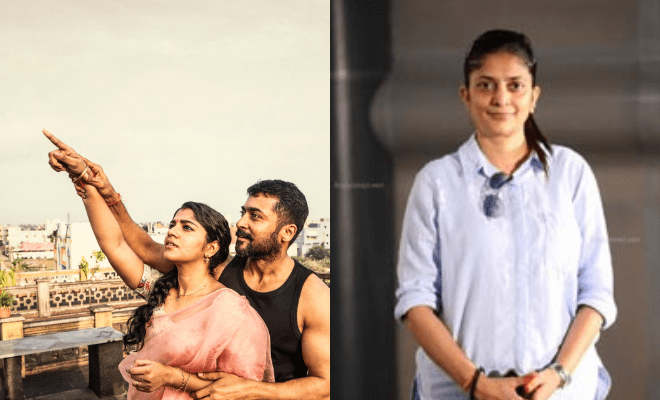 Today is an important day for the entertainment industry. Why? Well, today is the day when the winners’ list of the 68th National Film Awards was announced in New Delhi. Because of Covid-19, this year’s ceremony honoured films from back in 2020. And out of all the winners that were honoured with the prestigious award, it was Suriya’s Soorarai Pottru that won the title of Best Feature Film. What is even more special about the win is the fact that it was directed by a female director, Sudha Kongara Prasad.

Soorarai Pottru is a film that is partly inspired by events from the life of G. R. Gopinath, the founder of Simplify Deccan. Even though the film suffered due to the pandemic but made up for it on digital platforms. The audience and critics alike praised the film for its technical aspects, performances of the actors, and Sudha Kongara Prasad’s direction.

Sudha Kongara Prasad is the one who directed the National Film Award-winning Soorarai Pottru. She started out her directing career with the Telugu film Andhra Andagadu in 2008. And after being in the industry for over a decade, she has established herself as a successful director. Her biggest hit so far has to be the Suriya starrer that won hearts back in 2020.

Congratulations are in order for the whole team of Soorarai Pottru without whose contribution the film would have probably not done so well and also congratulations for bagging such a major honour.