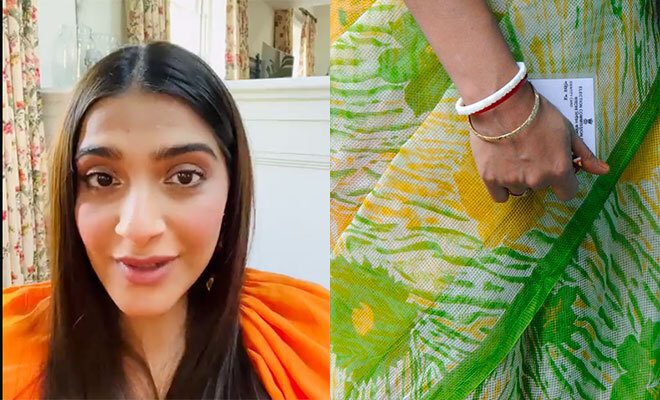 Sonam Kapoor, who recently had her baby shower and is currently residing in London with her husband and businessman Anand Ahuja, has always been on top of things and never shied away from doing her duties as a citizen of India. This is why it really doesn’t come as a surprise that the actress took the time out of her busy schedule to make a special appeal to the voters, especially the youth, to come out and vote for the Rajinder Nagar bypolls in Delhi. For those unversed, Sonam Kapoor also has a property with her husband in Delhi and often is seen travelling between Mumbai, Delhi, and London.

Bollywood actress Sonam Kapoor had recently been chosen as a ‘district icon’ by poll authorities of Rajinder Nagar, Delhi and they had even used photographs of her on posters and social media posts to reach out to all voters in the area – especially the youth.

Also Read: UP Election 2022: BJP Has More Female Voters And These Women-Centric Welfare Schemes Could Be The Reason

On June 23, the voting for the Rajinder Nagar bypolls in Delhi began at 7 am. And shortly after that, the official account of the District Magistrate/District Election Officer and New Delhi District posted a video message on Twitter wherein Sonam Kapoor is seen addressing all the eligible voters and asking them to vote.

In the video, the actress said, “I appeal to all the voters in Rajinder Nagar assembly constituency to come out with their family members and friends and vote in the June 23 bypoll.” The video was captioned, “Appeal by Sonam Kapoor, District Icon: Bye-Election Rajinder Nagar, Delhi on 23 June 2022.”

Women Voters Will Be An Important Factor In Assembly Elections 2022, 4 Out Of 5 States Including UP, Saw More Women Voters Than Men