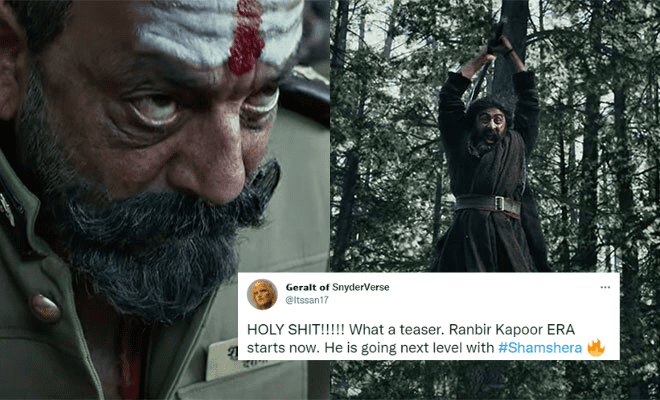 ‘Shamshera’ Teaser Twitter Reactions: Fans Are Tripping Over Ranbir Kapoor’s Look And His Range Of Acting

After being away from the big screens for a few years now, Ranbir Kapoor is back and that too with a list of stunning projects back-to-back. In fact, recently the actor has been making the headlines for his never-seen-before bandit look in Shamshera. Yep, the actor’s first look was leaked which created quite the buzz on social media. However, this buzz grew x10 times more when the makers of the Shamshera starring Ranbir Kapoor, Vaani Kapoor, and Sanjay Dutt dropped the teaser. And boy does it look good! I honestly, can’t keep calm looking at him in full action and being the messiah of his tribe. And trust me, this is not just me, even the fans are hell-a excited to see him in action.

On June 22, the makers of Shamshera starring Ranbir Kapoor, Vaani Kapoor, and Sanjay Dutt just dropped the teaser and it is everything I expected and more. The teaser shows Ranbir Kapoor coming in like a rugged knight to save his tribe from the cruelty of Sanjay Dutt’s armies. Along with the teaser they even revealed the trailer release date which will be on June 24.

Also Read: 10 Books To Read While You Eagerly Wait For ‘Brahmāstra’ To Release

Sharing the Shamshera teaser on their official social media account, Yash Raj Films wrote, “A legend who will leave his mark. #ShamsheraTrailer out on 24th June. Experience SHAMSHERA in @IMAX in Hindi, Tamil & Telugu. Celebrate #Shamshera with #YRF50 only at a theatre near you on 22nd July.”

Needless to say, no sooner did the Shamshera teaser starring Ranbir Kapoor, Vaani Kapoor, and Sanjay Dutt dropped than the fans couldn’t help but gush about how amazing it looked. In fact, this is what they had to say about the teaser:

HOLY SHIT!!!!! What a teaser. Ranbir Kapoor ERA starts now. He is going next level with #Shamshera 🔥 pic.twitter.com/R34iYXuuts

This shot mfs…. This is what you call mass🔥#RanbirKapoor #Shamshera pic.twitter.com/tgWOJ9wVxN

Imagine being the greatest actor of last generation and still managing to add to your range. Unprecedented #Shamshera #RanbirKapoor 🐐 pic.twitter.com/JWBmC6aSDn

If the story connects trust me no one stopping this film to become MASSIVE BLOCKBUSTER OF 2022… 300…350cr anything is achievable 🔥#Shamshera #RanbirKapoor pic.twitter.com/qa6puO0mus

Ranbir Kapoor in and as SHAMSHERA 🔥#shamshera #RanbirKapoorpic.twitter.com/3g5ro2ilhr

We have witnessed enough class of #RanbirKapoor now we r going to witness his mass hysteria.The intensity in his wild eyes n voice modulation is giving goosebumps.Some People were speculated of RK's range but Acting is in his veins.#Shamshera will bring out a different side of RK pic.twitter.com/D0MkftHG3V

I don’t know about y’all but I am eagerly waiting for the trailer to drop. After all, it has been quite a while since I saw one of my favourite actors (Ranbir) on the big screen.

Shamshera will release in theatres near you on July 22, 2022.