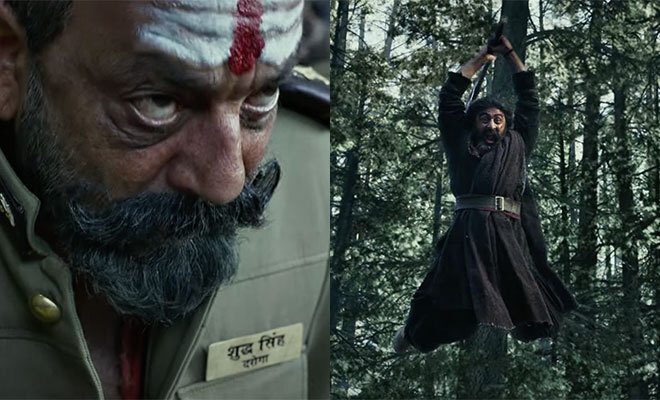 Ranbir Kapoor’s upcoming project Shamshera created quite a buzz on social media after his look from the film was leaked. Social media users were highly intrigued after seeing his look and are happy to see Ranbir starring in back-to-back releases. Now, in what comes as a surprise, the Shamshera teaser was dropped and boy, oh boy! We cannot keep calm looking at Ranbir full of action and being the saviour of his tribe.

The teaser starts with people being treated cruelly by armies which are headed by Sanjay Dutt’s character. Then, like a rugged knight riding a horse (minus the shining armour) comes Ranbir Kapoor AKA Shamshera. His go-to weapon in battle is an axe which he keeps slung on his back all the time. And then, in his own voice, he introduces himself as this unstoppable force who will come to save his tribe from the tyrannical Sanjay Dutt. The teaser ends with Shamshera saying the line, “Karam se dacait, dharam se azaad“.

Honestly, this one looks huge as Ranbir is always portrayed as the ‘chocolaty boy-next-door’. To see him in an action-packed avatar is a big deal and we want to see how he is going to do justice to such a heavy and intense role. We did not get a glimpse at Vaani Kapoor’s look but we are definitely looking forward to the trailer for it.

The teaser was shared with the caption, “A legend who will leave his mark. #ShamsheraTrailer out on 24th June. Experience SHAMSHERA in @IMAX in Hindi, Tamil & Telugu. Celebrate #Shamshera with #YRF50 only at a theatre near you on 22nd July.” Shamshera is directed by Karan Malhotra and also stars Vaani Kapoor alongside Sanjay Dutt.