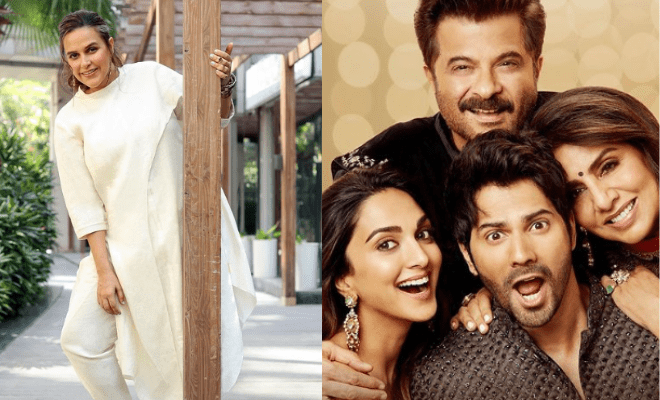 Neha Dhupia Is All Hearts And Praises For ‘Jugjugg Jeeyo’, Says It Is ‘Wonderful, Funny And Entertaining’

A family drama film by Bollywood is hitting the screens after a long time and fans are super excited about it! Yes, I am talking about Jugjugg Jeeyo, the multi-star cast film starring Anil Kapoor, Neetu Kapoor, Kiara Advani, Varun Dhawan, Maniesh Paul and Prajakta Koli in lead roles. The film is set to release in theatres on June 24, 2022, but a special screening of the same was held recently which was attended by several celebrities from the industry. Neha Dhupia who also attended the screening took to her Instagram to shower heaps of praises on the film.

Taking to her Instagram story, Neha Dhupia wrote that there is something about watching a ‘great film’ even before it releases and Jugjugg Jeeyo was that film for her. She rained praises on the film by saying that it was ‘wonderful, funny and entertaining’. Neha also showered love on the cast by writing, “Each one @varundvn @anilskapoor @kiaraaliaadvani @neetu54 you all are good, infact great… @manieshpaul @mostlysane so lovely… @raj_a_mehta you are so damn talented…@karanjohar @apoorva1972 always the game changers…Thank you for the laughs and the movies you make”. 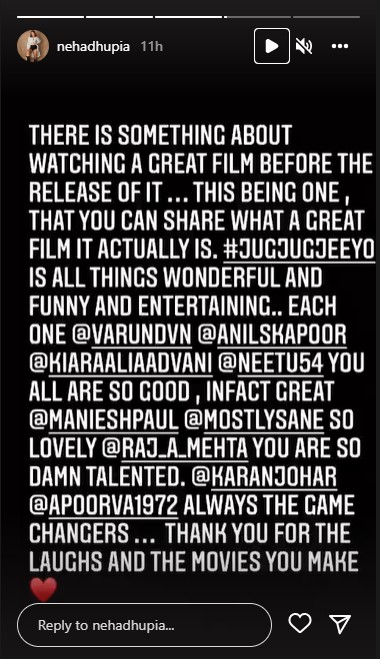 Jugjugg Jeeyo is directed by Raj Mehta and produced by Viacom18 Studios, and Hiroo Yash Johar, Karan Johar, and Apoorva Mehta under the Dharma Productions banner.

Also read: ‘Rangisari’: Varun, Kiara Have Sizzling Chemistry In This ‘JugJugg Jeeyo’ Song. But What’s With The Disconnected Video And Lyrics?

The trailer of the film sees how Varun Dhawan and Kiara Advani’s characters want to file for divorce but it isn’t as easy for them because obviously, Indian families do not cope well with the news of divorce. How they will navigate through these difficulties is something to look for in the film.