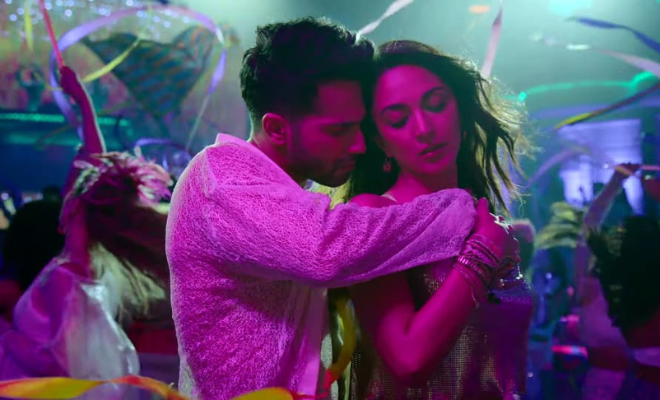 ‘Rangisari’: Varun, Kiara Have Sizzling Chemistry In This ‘JugJugg Jeeyo’ Song. But What’s With The Disconnected Video And Lyrics?

The upcoming family drama-comedy film JugJugg Jeeyo is highly anticipated by the audience. The trailer has left the fans looking forward to this crazy family, their problems and how they will resolve their issues. JugJugg Jeeyo is directed by Raj Mehta and stars Varun Dhawan, Kiara Advani, Anil Kapoor, Neetu Kapoor, Maniesh Paul and Prajakta Koli in the lead roles. The film is produced by Hiroo Yash Johar, Karan Johar and Apoorva Mehta. The audience has also been looking forward to the songs which have been released by the makers, with its new romantic track Rangisari being released on June 6, 2022.

The song is sung and composed by Kanishk Seth and Kavita Seth. The track opens with people dancing at a club and Varun Dhawan and Kiara Advani making an appearance together. They both feel undeniable chemistry and attraction between them and they go about teasing each other.

Varun and Kiara dance in each other’s arms on the dance floor, letting their eyes do the talking. They also groove to the music while never letting each other go. And when the chorus is sung, they both dance in sync with other dancers, breaking the flow of the chemistry.

The song is good, quite catchy even. But the video and the song do not go hand-in-hand. In fact, they feel severely disconnected. It is clearly a romantic song but it gives off a clubbing track vibe more than a love song vibe.

The song is the remix of the same-titled song from Madhuri Dixit’s Gulaab Gang movie and does a great job of not ruining the original. The slow yet upbeat tempo of the song makes it soothing to hear. Additionally, the chemistry between Varun and Kiara is natural and sizzling as they colour each other ‘gulaabi‘, quite literally!

But full marks for the colourful background, venue and setting. It is very vibrant and possibly the only thing that goes well with the lyrics. Had the video been more in line with the lyrics, the song would have been my favourite Bollywood track this year.

JugJugg Jeeyo will receive a theatrical release on June 24, 2022.

Kiara Advani Doesn’t Believe In Dating Apps. Neither Do We!