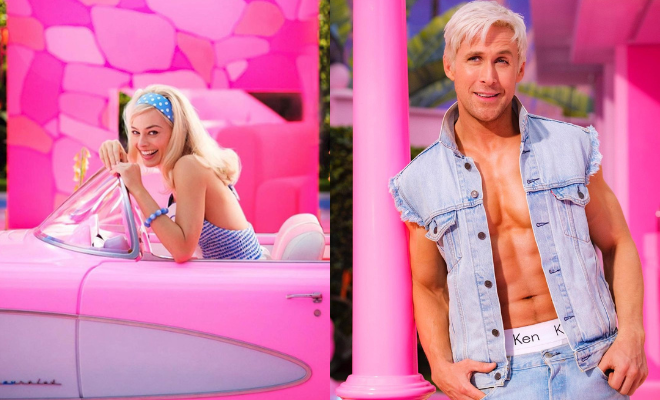 Yeehaw! Margot Robbie And Ryan Gosling Look Like Absolute Dolls On The Sets Of ‘Barbie’

The news that there was a live-action Barbie movie coming was a shocker within itself. To add the cherry on the top of the cake, we were faced with Ryan Gosling as Barbie’s male counterpart and boyfriend, Ken! And while people are still debating whether they would bang, marry or kill Gosling’s new avatar, photos have leaked from the upcoming movie where we see Margot Robbie as Barbie and Ryan Gosling dressed as trendy as a cowgirl and cowboy.

no words for margot robbie as Barbie pic.twitter.com/wBwfMqOkZB

Margot Robbie dressed as Barbie was seen wearing an eye-catching white cowboy hat while on the set of Greta Gerwig’s highly anticipated new movie. Margot looked like a doll in her signature long blonde hair in the photos. She walked and talked to her co-star in a hot pink sleeveless cowgirl pants outfit complete with fringes. Robbie’s wide-leg bell bottoms with star embellishment added to the drama and oomph of the bright pink outfit.

And to add to complete the look, her co-star Ryan Gosling, who plays Barbie’s partner Ken, wore a matching cowboy hat. Ryan was dressed similarly in a black cowboy-inspired look. He also matched Robbie’s hot pink bandanas around his neck and stylized white cowboy boots. Gosling donned a cowboy-style black jacket with white floral embroidery and white fringe detailing. They both looked absolutely iconic and were dressed in Barbie’s cowgirl collection.

Margot Robbie and Ryan Gosling on the set of Greta Gerwig’s BARBIE pic.twitter.com/VpXD4bEFEF

Also Read: Yes, We Know Ryan Gosling As Ken From ‘Barbie’ Looks Fantastic But Did You See That Custom-Underwear?

While Margot and Ryan appear to be the film’s leads, there are reports that other stars will appear as Barbie and Ken in the live-action movie. The alleged additional Kens are Simu Liu and Ncuti Gatwa, and the alleged other Barbies are Issa Rae and Hari Nef. Additionally, the movie also reportedly includes Kate McKinnon, Alexandra Shipp, Michael Cera, America Ferrera, and Will Ferrell.