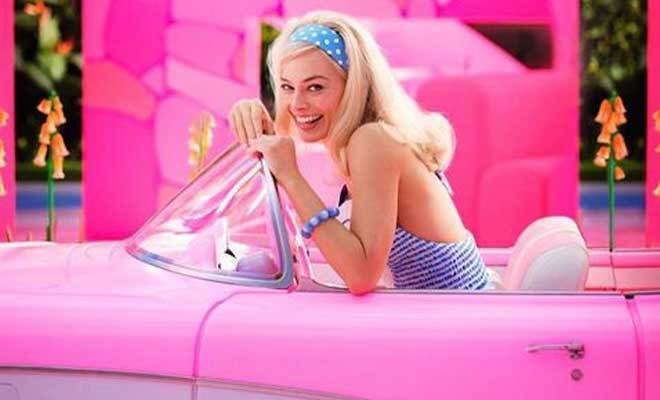 You know, I love Barbie dolls and animated Barbie movies and even though it feels childish, I can’t help myself but obsess over those beautiful plastic dolls. So, when I heard that we are getting a live-action film where Margot Robbie is playing the role of Barbie, I couldn’t keep calm. And now we got the first look picture of Margot as Barbie from the film and she is ready to party in her pink swanky car. She is looking so pretty, not gonna lie but where is Ryan Gosling aka Ken?

On Wednesday, Warner Bros released the first look picture of Margot Robbie from her upcoming film Barbie. In the picture, the Suicide Squad actress is all dolled up in a blue and white striped top, the hairband with polka dots and bracelet is not-so-interesting but her million-dollar smile stole our attention and hearts. The pink convertible in that pink background looks amazing, to be honest. The highly-anticipated film Barbie is all set to release in theatres on July 21, 2023.

Also Read: Disney Denied Saudi Arabia’s Request To Remove LGBTQ+ Scene From ‘Doctor Strange In The Multiverse Of Madness’. It Is Just 12 Seconds Though!

Talking about the film, Greta Gerwig is the director of Barbie and she also co-wrote the screenplay with Noah Baumbach. The film will also feature Ryan Gosling, Will Ferrell, America Ferrera, Simu Liu, Issa Rae, Michael Cera, Kate McKinnon, and Emma Mackey in pivotal roles.

Well, we also want the first look picture of Ryan Gosling aka Barbie’s boyfriend Ken, please! The film will release on July 21, 2023.

Disney Denied Saudi Arabia’s Request To Remove LGBTQ+ Scene From ‘Doctor Strange In The Multiverse Of Madness’. It Is Just 12 Seconds Though!