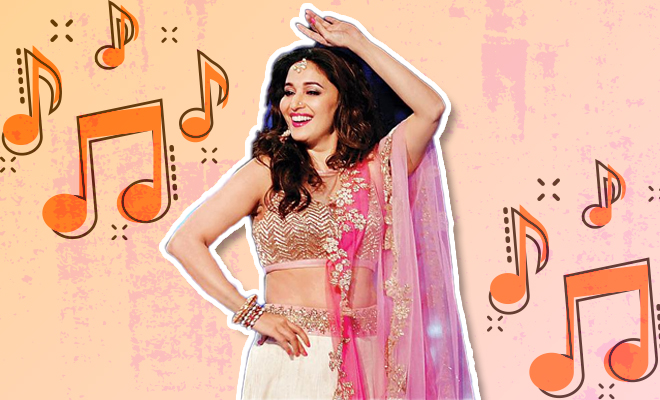 Madhuri Dixit Adds Desi Tadka To Meghan Trainor’s ‘Me Too’ Song With Hook Steps From ‘Chane Ke Khet Mein’. We Heart It!

Madhuri Dixit is the dancing goddess of Bollywood. Through her dancing skills, she gave us the perfect solution to our mid-week blues. You just have to turn up the music and dance like no one’s watching! The Devdas actress shared a video on her Instagram account, in the video she can be seen dancing flawlessly To Meghan Trainor’s vibey and hit song ‘Me Too’ with perfect expressions on her face with a desi twist. And she stole our hearts!

Take a look at the video:

She did the hook steps of her evergreen songs ‘Ek Do Teen’ and ‘Chane Ke Khet Mein’ while dancing on the song. It’s safe to say that Madhuri Dixit can perform her iconic hook steps on literally any song. As for the caption, the actress picked a line from the song, which read, “If I was you.”

Madhuri Dixit has picked a blue denim jacket and trousers for the funky dance session. Till now, the clip has more than 1.9 million views. Her comments section is filled with her fans praising her. Actress Mouni Roy who has confessed that she’s a big fan of Madhuri Dixit commented with heart-eye emojis.

The Dhak-Dhak girl always shares glimpse of her life with her fans on a regular basis, she shared her love for food on her Instagram handle. In the video, the actress can be seen with a large Gujrathi thali. She wrote, “Food = Love.” She also added a sticker to the clip that said, “Good food is a good mood.” Same here!