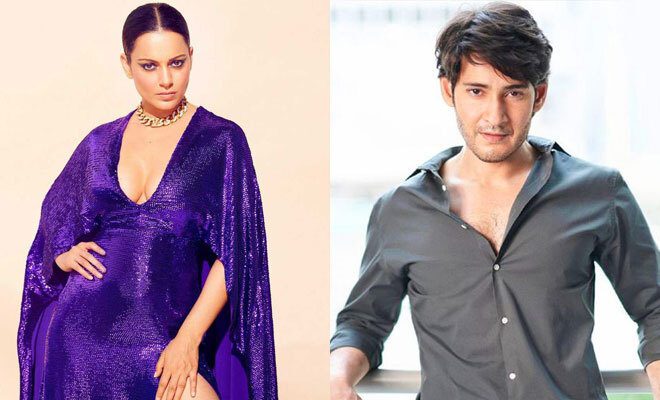 Guys, I think there is something going on in Bollywood right now and I have mixed feelings about it. Apparently, Kangana Ranaut is in good mood these days but I feel like kuch toh gadbad hai (ACP Pradyuman hand gestures) for unknown reasons. Recently, she supported Telugu star Mahesh Babu over his ‘Bollywood can’t afford me’ comment and said that we should not create controversies over small things. Okay, then!

Earlier, Mahesh Babu was asked about an appearance in Bollywood films to which he said that he gets many offers from filmmakers but Bollywood cannot afford him and he doesn’t want to waste his time. Later, the Spyder actor mentioned that he does not want to work in another industry other than the Telugu industry. Good for him, to be honest!

When Kangana Ranaut was asked to comment on this matter, she agreed with his remark and said that he’s right as Bollywood cannot afford him. She mentioned that Mahesh Babu has shown respect for his work and industry. The Queen actress added that she believes that all languages in our nation are equally respectable and it’s a small thing that we respect each other’s languages.

Also Read: Kratika Sengar And Nikitin Dheer Reveal The Name Of Their Newborn Baby Girl With A Sweet Message!

Well, Mahesh Babu is a superstar and we don’t think that he needs to appear in Bollywood films any time soon. Talking about Kangana, we think that this Agni is very cool, ha!