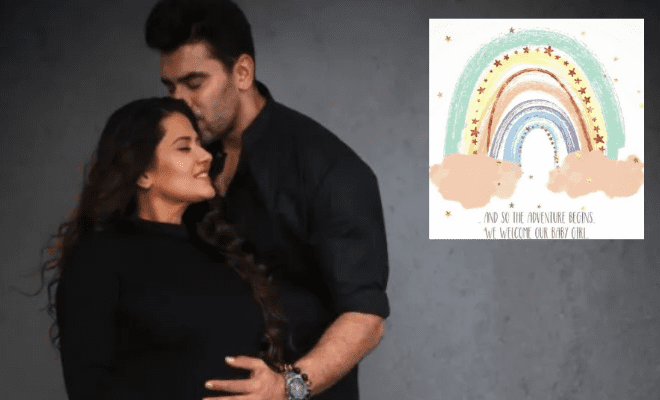 Kratika Sengar And Nikitin Dheer Reveal The Name Of Their Newborn Baby Girl With A Sweet Message!

The birth of a child is most definitely one of the highlights and happiest moments for a couple! We saw several celebrities so far announcing the birth of their newborns via social media and it made my heart fill with joy! After Bharti Singh, Debina Bonnerjee and, Kajal Aggarwal, the latest celebrity couple who welcomed a baby were Kratika Sengar and Nikitin Dheer! They became proud parents of a baby girl on May 12, 2022. The couple made an official announcement of the same via a cute social media post on May 13, wherein they also announced the name of their lil munchkin!

They shared coordinated posts on their respective social media handles to announce the good news to their fans and well-wishers. The picture was all sunshine, rainbows and clouds with a note that read, “And so the adventure begins… we welcome our baby girl Devika Dheer. 12/05/2022.” Sharing the post, they also wrote the caption, “We feel blessed to share with you the arrival of our darling daughter!
-Dheers.”

The couple tied the knot in 2014 and announced their pregnancy in November 2021. Kratika also shared lovely pictures from her maternity photo shoot on her Instagram handle and we cannot help but obsess over them! She wore a yellow ruffled dress from Bumps And Frills that had a long train as well. She was holding a bouquet in her hands as she struck gorgeous poses for the camera.

Meanwhile, on the work front, Nikitin Dheer was last seen in the Salman Khan starrer Antim: The Final Truth and the Telugu film Khiladi.