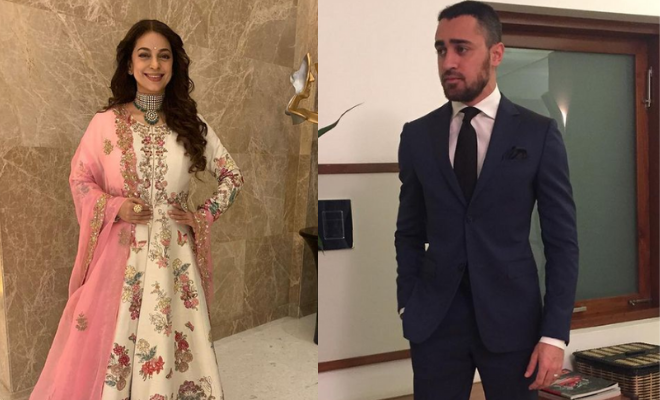 Kids are lucky in a lot of ways but mainly in the way that they have no filter and aren’t expected to have one. They can say exactly what they feel without any real consequences that an adult would have to face. I think that adults use these incidents as ammunition so that they can tease you about it as adults, or am I the only one that’s cruel? An adorable example of this can be seen when Juhi Chawla wished Imran Khan for his birthday and reminded him of the time he asked her to marry him as a 6-year-old.

On Imran Khan’s birthday today, he was wished by veteran actor Juhi Chawla as she fondly remembers the time when Imran proposed to her for marriage when he was merely 6 years old. She also referred to herself as a diamond, saying that Imraan has always been good at recognising gems. The confidence I want for 2022 and every year henceforth!

Juhi Chawla posted a collage with pictures of herself, Imran Khan as an adult and as a child too! She posted a hilarious and nostalgic caption which says, “Imran proposed to me when he was 6 years old ..!!!!…. heere ki pehchaan tab se hai usmein..!!!! Happy Happy Birthday to my youngest suitor ever..!!!! A 100 trees for you Imran…”

Also Read: Juhi Chawla On Instagram: I’ll Let You Decide If The 5G Episode Was A Publicity Stunt

Imran Khan was last seen acting in 2015 in Katti Batti, alongside Kangana Ranaut. However, according to sources, he has quit acting and moved towards being behind the camera. He recently debuted as a director with his short film, Mission Mars: Keep Walking India.

The purity in Juhi Chawla’s post makes my heart warm. It reminds me of the times my relatives fondly remember my childhood fondly. I hope Imran Khan got a good laugh out of this and an amazing birthday as well!

Surveen Chawla Talks About How Playing Jojo Did Affect Her Negatively But She Snapped Out Of it. What A Star!