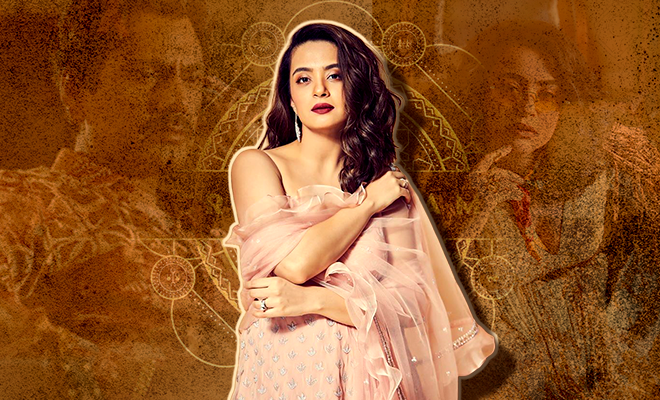 Surveen Chawla Talks About How Playing Jojo Did Affect Her Negatively But She Snapped Out Of it. What A Star!

Every few years there is a show or a movie that grips everyone by their eyeballs. Yes, I know I turned that around very well. Last year, the show that had everyone hooked onto it was Sacred Games. I remember watching the first episode with a lot of apprehensions but once I began, I went through the show like a stoner goes through cheeselings. I think the reason everyone loved the show so much was because of how much dedication the actors put into their characters. From Saif Ali Khan to Nawazuddin Siddique, everyone did a fabulous job in pushing the intriguing storyline forward. Of course, plenty of people were upset with how it all played out, but hey, we were all hooked for a while there.

One of my favourite characters in the show was Madam Jojo Mascarenas played by Surveen Chawla. Though she was killed by Gaitonde in the first episode itself (Spoiler alert!) she was a recurring character through season 1 and 2. The character of Jojo was dark, extremely headstrong and unforgiving which created a certain sense of mystery around her. She received a lot of well-deserved acclaim for this role. But every time I see an actor portraying a character like Jojo’s I can’t help but wonder if it affected them in any way. Especially in Surveen’s case, since she was pregnant while shooting the second season. Did you know that?

In a time when you are supposed to surround yourself with flowers and rainbows, Surveen was surrounded by all that pessimistic energy from the character she played day in and day out. As it turns out, unfortunately, it did affect her. In a recent interview, Surveen was talking about how she found playing the complicated character Jojo quite difficult and even more so because of her pregnancy.

Also Read: Surveen Chawla AKA ‘Jojo’ Reveals She Wants To Work More In The Digital Space Because TV Content Is Not Interesting

She said, “There is nothing common between Jojo and me. I was pregnant at that time, so it was a little difficult too because normally you want to be happy and stay away from negativity but here I had to drown myself into negativity because Jojo was very unforgiving and bitter. It was challenging as an actor on-screen as well as off-screen.”

I knew it was tough for actors that played such dark and intense roles for they have to completely become that character. But doing that while pregnant just sounds like a mammoth task because you have to make sure you immerse yourself in the character to make it believable on screen but not so much that you are only surrounded by that negativity. It can’t be good for the baby or your own mental health.

In the same interview, Surveen also talked about how she found it very difficult to switch on and off considering her life was in such a sensitive stage. She said, “This was a milestone moment in my life per se so going into a very negative and dark zone and switching on and off became confusing. I even shared with Amruta (Subhash, who plays the character of Kusum Devi Yadav), that I personally found Jojo confusing. She was a very confused personality and I was wondering where I am. I had to just let go and learned from my own experiences.”

Also Read: Surveen Chawla Talks About How She Dealt With Post-Partum Depression. This Is The Kind Of Realness Moms Need To Hear About

I can’t even imagine how tough it must’ve been for her to play the character to such perfection all day every day and then just have to snap out of it and be your happy self at home. A show is only as good as its characters are. In a show like Sacred Games especially if even one character is not believable, the illusion of the whole thing just crumbles. We don’t think of the actors, how the characters affect them in a multitude of ways. I personally can’t imagine how Surveen managed to pull Jojo through with such conviction when in real life she was in the complete opposite frame of mind. What a lady!

Earlier this year, Surveen and her husband Akshay Thakker announced the birth of their daughter with an adorable post. She captioned the post, “We now have her tiny feet to fill the tiny shoes! Blessed by her wonderful arrival in our little family! Welcoming our daughter Eva.”

This is a mark of a kickass actor!

Surveen Chawla Opens Up About The Casting Couch. With So Many Actresses Talking About It, We Hope It’s A Deterrent