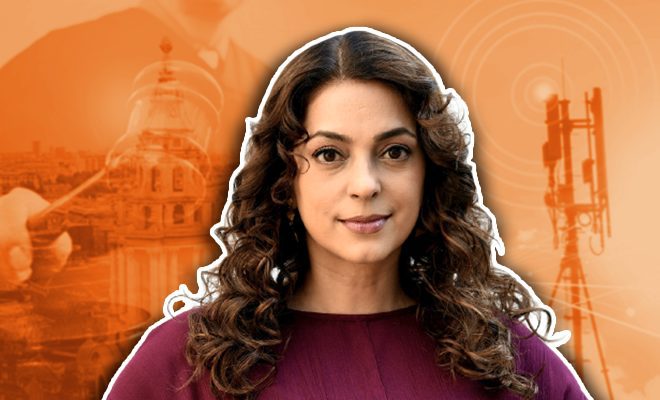 Juhi Chawla On Instagram: I’ll Let You Decide If The 5G Episode Was A Publicity Stunt

More often than not when a celebrity does something that isn’t a part of their field, they are often seen as means to gain publicity. Whether the cause for what the celebrity stands for is right or wrong – doesn’t matter anymore. And all the focus is driven towards whether the celebrity did it as a publicity stunt or not. Take the most recent example of the Bollywood actress, Juhi Chawla who has turned into an environmentalist when she opposed the implementation of 5G mobile technology in India.

Recently, the Bollywood actress Juhi Chawla was accused of pulling off a publicity stunt in the 5G case where she opposed the implementation of 5G technology in India. She has, for quite a while now, been actively generating awareness about the harmful effects of radiofrequency (RF) radiation.

On 31st May, Juhi Chawla had filed a lawsuit against the coming up of 5G  wireless network technology in India. Her stance against the 5G technology was based on her own experience with the installation of cellular towers in her area.

After filing the lawsuit, the Bollywood actress was accused of turning this act into a publicity stunt rather than anything else. Taking to her Instagram, Juhi Chawla opened up about how and why she began the fight against the installation of cellular towers in India.

In her 14-minute long Instagram video, Juhi Chawla spoke up about how she saw 14 cellular towers being installed in Sahyadri Guest House, which is right near her house. She revealed that later on, she came across an article that listed as well as explained the harmful effects of cellular radiation on human health. She spoke about how 5G technology would expose people and animals to radiofrequency (RF) radiation. The kind of radiation that will be way worse than what it is now.

Juhi Chawla, in her Instagram video, added, “All this while I remained silent because I believe silence has its own deafening sound, but now I’d like to bring forth some very important and shocking details of happenings, in my 11-year journey of discovering EMF radiation, its health effects and the glaring ignorance of certain authorities in this regard.”

The Bollywood actress, Juhi Chawla ended her video asking her Instagram followers to decide for themselves if what she did was a publicity stunt or not. And I feel that is one of the best ways to leave the topic at. Let the people who have been forming opinions hear about your side of the story and then leave it to them if they want to think otherwise or not. Honestly, as far as I am concerned, I have read enough articles to know that radiofrequency (RF) radiation that is greater than what it is now is extremely harmful to all living beings. But I guess, each to its own.