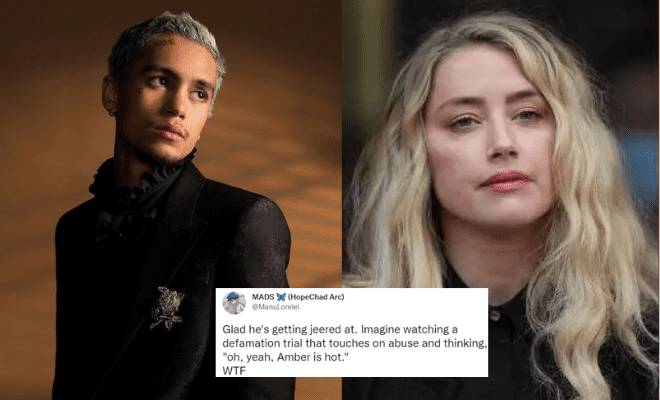 ‘Euphoria’ Actor Dominic Fike Says He Has Visions of Amber Heard Hitting Him, Gets Slammed For Romanticising Abuse

The Johnny Depp-Amber Heard defamation case has been the talk of the town currently as lawyers of both the sides have presented their closing arguments. Now, the jury has to decide the verdict of the case and announce both of whom have won this case. Amid this trial, people have already picked sides most of which are favouring Johnny Depp. People on social media have also made memes and videos mocking Amber Heard. In now what comes a shocking comment from Euphoria actor Dominic Fike who recently said on stage that he has been having visions of Amber Heard beating him and that he finds that ‘hot’.

Dominic Fike is also a songwriter and a musician who was recently performing at Northwestern University, Illinois. While he was on the stage, he suddenly mentioned Amber Heard and described her as hot. He said, “Yo, I’m just gonna come straight out and say it. I’m gonna say it. I’m gonna be real with y’all, I think Amber Heard is hot, man”. He also went on to say, “I know it’s not a popular opinion, and it’s not the focus at the moment, dude, but I’ve been having these visions of her just beating me up. I think it’s hot.”

dominic fike making fun of johnny depp and other male victims by saying he thinks amber heard is “hot” and he has “hot” visions of her abusing him.🤢#AmberHeardlsAnAbuser #JohnnyDeppVsAmberHeard pic.twitter.com/OBRylRsayD

Fike has been receiving a lot of flak for his comments. One Twitter user has said that Dominic should be ‘ashamed’ of himself for ‘romanticising abuse’. Another went on to write that his comments were absolutely ‘unnecessary’. One of them wrote that irrespective of how people view the trial, this was a ‘disgusting’ thing to say.

Dominic Fike really thought he did something when he said he had visions of Amber Heard beating him up. When in a reality, he just made himself look like a twat and downright disrespectful by romanticising abuse, as if it’s something to brag about. Should be ashamed of himself!

absolutely unnecessary like u couldve said nothing here u go sayin this… y https://t.co/OqRcjphySc

Glad he's getting jeered at. Imagine watching a defamation trial that touches on abuse and thinking, "oh, yeah, Amber is hot."
WTF https://t.co/vFX3UQ55EF

i wasnt really looking forward to dominic fike anyhow but hearing him say ‘i think amber heard is hot, i want her to hit me’ turned me tf off. that’s disgusting no matter how you view the trial and a weird thing to say about a potential abuser/victim

I don’t know who Dominic Fike is and I don’t care. He made a mockery out of abuse. Something horrifying a lot of women like me and men have gone/go through. To say you want Amber Heard to beat you up because she’s hot is BEYOND disgusting! pic.twitter.com/ruhCGTuEKo

Sometimes celebrities just need to shut the fuck up and not talk about their weird fetishes or secrets, like I did not want to know that Dominic Fike gets off to amber heard getting beaten

no wonder i never liked this man, he’s so disgusting and v weird https://t.co/r56Y5IjBpF

This was indeed very stupid of Dominic Fike to pass such comments about fantasising an abusive relationship. It is quite common sense to not comment and mock someone getting abused or wanting to get abused. But apparently, people need to be schooled about it as well!