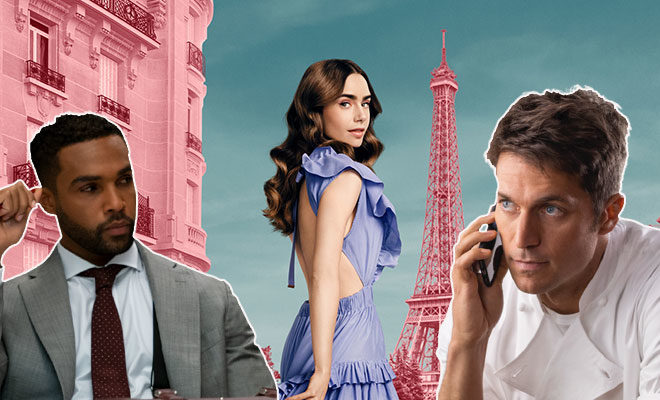 5 Thoughts I Had About The ‘Emily In Paris’ Season 2 Trailer: Oui To More Gabriel, More Amour, And More Complications!

This is not a drill! We have the first official trailer for Emily In Paris Season 2! I repeat, Netflix has dropped the first trailer for Season 2 of Emily In Paris and Lilly Collins is back with a whole new set of complications and lots of Eau de Escapism for us fans. But mesdames et messieurs, excuse me while I go drown myself in the gorgeous blues of Gabriel’s eyes. Because if you remember what happened in the final episode of Season 1, you know that we will get to see a lot more of Lucas Bravo this season, albeit it’s going to be too much sexual tension between Emily and Gabriel, since he isn’t going to Normandy anymore! Although, if this trailer is any indication, Emily has lots more of fun, fashion, amour and complications to look forward to (or not) this season. Sex And The City creator Darren Star returns to helm the Season 2 of this Emmy nominated series. Lilly Collins is headlining as Emily Cooper, and with series regulars Philippine Leroy Beaulieu, Ashley Park, Lucas Bravo, Camille Razat, Samuel Arnold, Bruno Gouery, and William Abadie, and guest star Kate Walsh.

The official synopsis for the new season reads, “Now more entrenched in her life in Paris, Emily’s getting better at navigating the city but still struggling with the idiosyncrasies of French life. After stumbling into a love triangle with her neighbour and her first real French friend, Emily is determined to focus on her work — which is getting more complicated by the day. In French class, she meets a fellow expat who both infuriates and intrigues her….”

Here are five thoughts I had while watching the Emily In Paris Season 2 trailer:

1. OMG, is Sylvie going to warm up to Emily in this season?

Did Sylvie, THE Sylvie Grateau just tell Emily Cooper to enjoy her time in Paris and that she’s getting more French by the minute? I have loved the hot and cold dynamic between these two, and I look forward to watching how their relationship, and Emily’s relationship with her French coworkers develops through Season 2.

2. I am so invested in this love triangle between Emily, Gabriel and Camille. If both these women are confused, can I have him?

Okay, I have watched and rewatched Emily In Paris way more than I am comfortable admitting. And one of the major reasons for this is Gabriel, played by Lucas Bravo. Have you seen those eyes? Okay, moving on, the love triangle that was brewing all season is now going to get intense, because Emily, Camille and Gabriel are all in Paris! I am thinking more longing glances! But also, Emily is getting a new love interest, and he is smokin’ too!

Forget Emily, I am now confused about which couple to root for! For now, Emily must decide between going to St. Tropez with her new boyfriend for a romantic weekend getaway or staying in Paris and handling Gabriel and Camille! Fun!

Also Read: Emily In Paris Was A Battle Of Escapism vs Realism In My Head. Escapism Won And Je Ne Regrette Rien!

3. I am going to be keeping a sharp eye on the show’s fashion statement this season?

Emily In Paris is a show that has gotten a lot of criticism, particularly for its fashion choices. And well, I agree with some and not with others. But one thing I am looking forward to this new season is if the show makes any conscious effort to counter this criticism in their outfit choices for Lilly Collins. I’d like to think this whole thing is intentional. Emily is ringarde like most of us, because not everyone can embrace being fashionable naturally, so maybe as the show progresses, we will see some change?

4. There are new cast members joining in! And that means… more hot people!

5. Emily In Paris is easy escapism. But can this season overcome this criticism and actually bring more substance?

Another major criticism about the show was how it was trashy escapism and lacked any substance. I wonder if the writers have been motivated to improve on that… I want more stories for the secondary characters, especially Mindy, played by Ashley Park!

Either way, I know I need my dose of rom-com, fashion and fun and Emily In Paris gives me just that, that too in time for the holiday season! So excitement for this new season is full steam ahead!