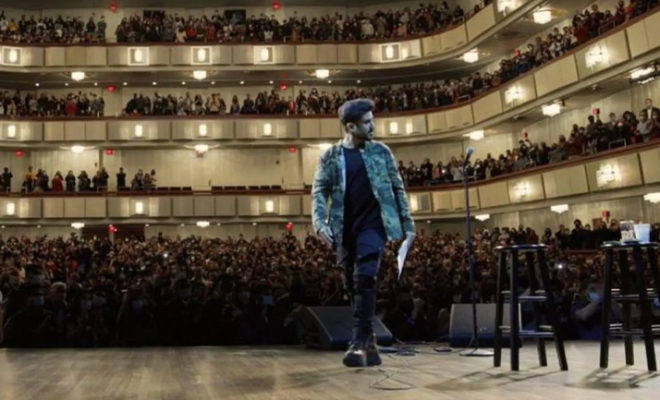 It is funny and kinda terrifying to me how ignorant our countrymen can be. Despite the constant news of women and even minors being raped, molested and abused in different ways, many of them turn a blind eye to the situation and act as if the country we live in has no flaws and is perfect in every way. Hence they get offended and want to throw FIRs at anyone who criticises our country. Following the same pattern, a BJP leader has gotten offended over comedian Vir Das’ monologue called, ‘I Come From Two Indias’ and filed an FIR against him.

BJP Leader Aditya Jha has accused Vir Das of using derogatory language towards India and women in the recent video he uploaded where he performed  ‘I Come From Two Indias’ at John F Kennedy Center in Washington, DC, United States. According to The Indian Express, Aditya Jha said, “He (Vir Das) says in the video… ‘In India, we worship women in the day and rape them at night.’ These derogatory statements against women and India are inflammatory. They were made in the US and malign the image of our country internationally. I want police to conduct an investigation,” He went and lodged the complaint in the New Delhi district on Tuesday night. Rich that a man has to talk about what is allegedly “derogatory” towards women. Many like Jha, including Kangana Ranaut, were unhappy with these remarks. However, the senior police officer said no official FIR has been filed.

Vir Das responded to these objections through a statement saying, “The video is a satire about the duality of two very separate India’s that do different things. Like any nation has light and dark, good and evil within it. None of this is a secret…”

Congress Leader Shashi Tharoor backed Vir Das up and called his performance “brilliant.” and wrote, “A stand-up comedian who knows the real meaning of the term “stand up” is not physical but moral. Vir Das spoke for millions in this 6-minute take on the Two Indias he hails from and stands up for.” Former Union Minister and Congress leader Kapil Sibal also issued a statement favouring Vir Das and said, “None can doubt that there are two Indias. Just that we don’t want an Indian to tell the world about it. We’re intolerant and hypocritical.”

I completely agree with Vir Das and those who supported him. Firstly, what is derogatory for the women of the country should be decided by them. Secondly, it is naive, intolerant and ignorant to try and hide a problem so obviously glaring that cases reporting the issue are heard of every day. Women in India are unsafe and that is the reality. Trying to sweep it under the rug under the guise of preserving a positive impression of the country is going to aggravate the situation. The log kya kahenge mentality needs to go now.