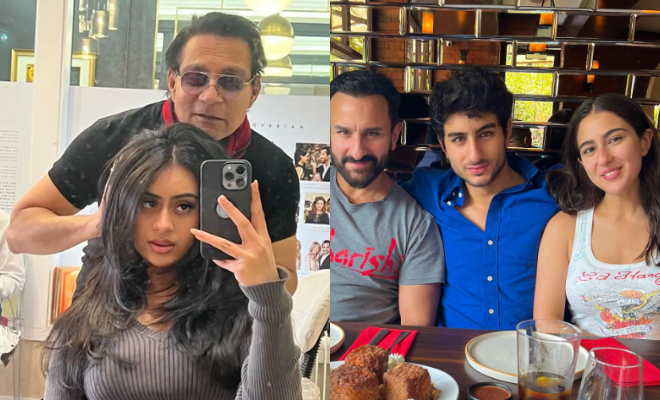 Jobless trolls have an affinity for celebrities. They are just sitting and waiting for a celebrity to just do something so that they can go about trolling them. These days, the trolling has also become so random that it has begun to stop making sense. From nasty comments on a female celebrity’s outfit to derogatory comments on which actor is going out with whom, trolls never leave anything out. Now, the focus has shifted to the second generation of these stars, that is their children. Trolls have made it their life’s mission to go after the star kids. From Nysa Devgn, Sara Ali Khan, to Ira Khan and others, these celebrity children have trolled for something that is absolutely normal in their household. So, just because they do not relate to the star kids’ lifestyle, trolls have gone on to, well, troll them for it. Here are 5 times this happened.

Nysa Devgn Trolled For Going To Salon After Grandfather’s Death

Yes, Kajol and Ajay Devgn’s daughter Nysa was trolled for going to the salon after her grandfather Veeru Devgn passed away. Ajay Devgn gave it back to the trolls by saying that he asked her to go out because she was affected by Veeruji’s passing.

Ira Khan, Aamir Khan’s daughter, was trolled for wearing a bikini in front of her father at her birthday party. People called her names and whatnot for the same.

Aaryan Khan Trolled For Drinking After Getting Respite In Drug Case

Shah Rukh Khan’s son Aaryan Khan faced severe backlash when he was spotted drinking in a club after he was relieved in the drug case he was arrested for.

Sar and Saif are often seen hanging out with one another. One such time, trolls decided to call her out for wearing shorts while having lunch with him.

Suhana Khan Trolled For Not Posing For Paps

Shah Rukh Khan’s daughter has grabbed the spotlight far too many times even before her debut in the industry. She was trolled once for not posing for the paparazzi.

Also read: Rashami Desai Gets Fat Shamed For Sharing Fitness Video. Forget Fats, Can We Lose Some Of These Trolls First?

First of all, it is these trolls who are so interested in the lives of these star kids that they want to know every detail about them. Second of all, they also have the audacity to judge them for wearing what they want, eating what they want and going out with whomever they want because as if celeb kids need to seek their permission before their parents! Make it make sense, yaar! Ranu Mondal Was Trolled For Her White-Washed Makeup. Twitter Came To Her Support But Does This Reveal A Deeper Bias Against Dark Skin?