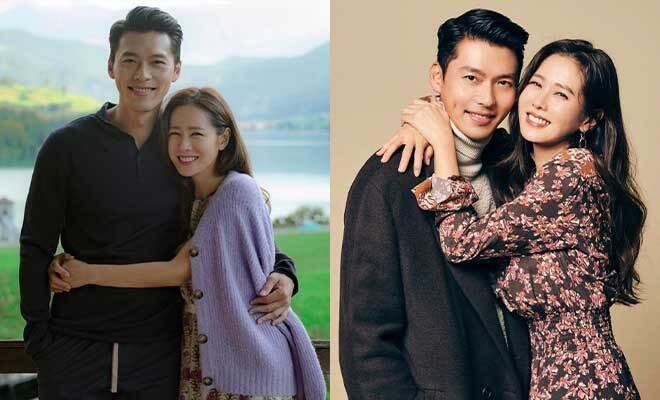 As we know that it’s raining shaadi in the Indian entertainment industry where every now and then a celebrity couple announces their wedding. And seems like South Korea thought why should Bollywood have all the fun and we got the news that the South Korean entertainment industry’s most powerful couple Son Ye-Jin and Hyun Bin are getting married. They both appeared in the hit Korean drama Crash Landing On You and amazed us with their beautiful and heartwarming chemistry. On February 10, 2022, they both announced their plans of marriage on their social media. In her post, Son Yejin wrote, “Just being with him, I feel warm and protected. Please help us celebrate the beginning of our future.” Hyun Bin shared a handwritten letter in which he wrote, “I have made this promise with the woman who always makes me laugh, to walk together in the days that lie ahead.” From being a reel life couple to a real-life couple who is going to tie the knot pretty soon, the sweet moments between them made their fans believe in love all over again. So, we decided to compile all the sweet moments of BinJin that will make anyone’s heart flutter.

A post shared by Crash Landing On You (@crashlandingonyou.drama)

Here Are 5 Sweet Moments Of Son Ye-Jin And Hyun Bin AKA BinJin Couple That Made Us Swoon Over Them:

1. Goofing Around With Filters: Where It All Started

Before their hit series Crash Landing on You, Son Ye-Jin and Hyun Bin appeared in the film The Negotiation and became good friends. Due to promotions, they both spent a lot of time together and Ye-Jin posted a bunch of pictures with her co-star on Instagram where the couple can be seen goofing around with cute filters. After that, the dating started spreading like a wildfire and now look at them.

Take a look at these cute videos:

After the popular drama, the lead actors got surrounded by questions about their dating life but they always denied them and claimed to be just good friends (that was a BIG FAT LIE). However, on New Year’s Day of 2021, their agencies officially revealed that Son Ye-Jin and Hyun Bin are actually dating. Son Yejin shared a post confirming her relationship and wrote, “I’m thankful to have been able to meet a good person, and I’ll work hard to tend [the relationship] with care … The love and support that all of you give me, I’m always keeping it in my heart.”

Before confirming their relationship, Son Yejin and Hyun Bin participated in many interviews for promoting Crash Landing on You and they gave us major couple goals, TBH. The interviews were filled with so much chemistry and their looks and mannerisms hinted that they are kind of attracted to each other, you know eyes don’t lie, right?

4. Son Ye-Jin On You Quiz On the Block

Son Ye-Jin appeared as a guest on the talk show, You Quiz On The Block. In the show, the MC asks the actress —who is famously known for being “The Nation’s First Love” about her first love. Son Yejin shyly grinned and answered that her first love is her current love and that signalled that it was Hyun Bin. Why so adorable, you both?

Also Read: ‘Crash Landing On You’ Couple Son Ye-Jin And Hyun Bin Are All Set To Tie The Knot. We Want The Invitation, Please!

Son Ye-Jin and Hyun Bin are literally a match made in heaven. The couple is reportedly getting married in March and we can’t wait to see the official picture.