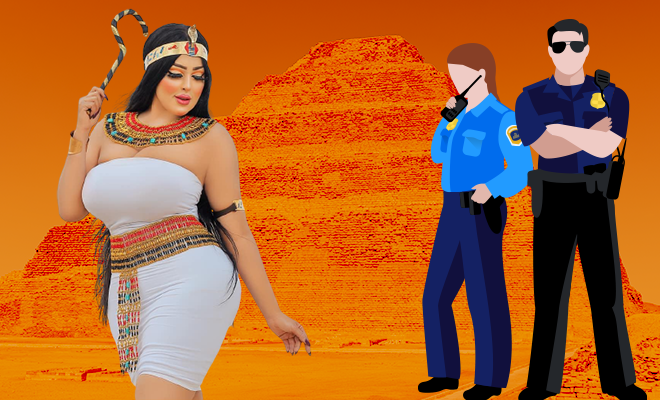 I started my day today scrolling through Instagram (like every day, NBD) and stumbled upon this remarkable speech on gender equality by Emma Watson. She mentioned how, even today, no country can say that it has achieved gender equality in terms of education, opportunities and social stature. While that’s not surprising at all, the status of women in certain countries is extremely disappointing as compared to their male counterparts. Egypt is one such country where, time and again, women have been the victim of moral policing on the basis of their clothes. They have been thrown into prison for making TikTok videos, doing a photoshoot or wearing clothes that don’t sit well with the Egyptian culture and authorities, while men pose nude on social media and no one points a finger.

Women’s clothing has always been viewed as a way of defining morality in society to an extent that a bill to criminalise revealing clothes had been proposed on account of regulating public behaviour. The recent incident that happened to a model and a photographer proves how Egypt sees women’s clothes as immoral and offensive, even when they aren’t inappropriate at all. Photographer Houssam Mohammed and model Salma al-Shimi were accused of conducting a photoshoot at the Pyramids, which was deemed indecent since the model was wearing a revealing ancient Egyptian costume. According to the authorities, it harmed the heritage site.

The photoshoot was done at the step pyramid of Djoser in Egypt’s Saqqara necropolis, south of the capital city of Cairo, where dancer and model Salma al-Shimi wore an Egyptian outfit that wasn’t indecent at all. “All those found guilty of harming archaeological sites and Egyptian civilization will be punished,” said Mostafa Waziri, secretary-general of Egypt’s Supreme Council of Antiquities, in a statement. We don’t get what’s so sinful about clicking photos in completely decent and normal costume at a heritage site?

Also Read: Authorities In Egypt Are So Threatened By Women Influencers Using Tik Tok To Talk About Gender Issues That They’re Arresting Them

A judicial source claimed that the duo didn’t take the permission to conduct the photoshoot at the Pyramid and broke the rules set by the Ministry of Antiquities, which includes a ban on taking indecent and disrespectful photographs at the ancient pyramids. They said they were imprisoned for “taking photos without authorization in the Saqqara archaeological site.” However, the only thing that was deemed inappropriate was the outfit the model was wearing. She wore a tight-fitting white Egyptian costume. But here’s the thing. If you look back at the history of Egyptian pharaonic dresses, you’d find that women wore minimal clothing made of metal which didn’t cover their shoulders and legs. So, how is this costume any more offensive than the ancient costumes?

This is not the first time a woman has been accused for public indecency for wearing a revealing dress. Last year, actress Rania Youssef was also arrested for wearing a black see-through gown that only exposed her legs through a lace fabric. She was charged for “incitement to debauchery” and had to issue an apology statement to the nation for tarnishing its image in the world by wearing an inappropriate dress.

The photographer and the model have been released on bail and the pictures that were shared on the social media by the model have now been taken down and legal action has been taken. The photoshoot sparked massive backlash, while some expressed their disbelief stating there was nothing wrong with the clothes and the photoshoot was far from disrespectful. A user asked, “Is there really a ban on taking photographs in archaeological zones, even pictures that are not indecent but completely normal?” And seriously, we have the same question.

Also Read: An Egyptian Actress Had To Apologise For Wearing A ‘Revealing Dress’ Because It’s Against The Culture. The Oppression Is Suffocating