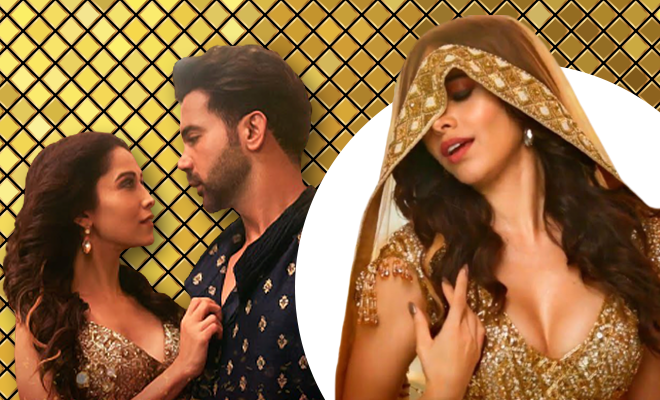 5 Thoughts We Had About Deedar De Remix From Chhalaang. Mainly, Why Are We Still Doing Heaving Bosoms In 2020?

When Karan Johar said, “Oh God, one more remix!” I felt that. I feel that almost every other week when a new Bollywood movie release decides to amp up its appeal by remixing, remaking, rehashing an old song that went popular. Take Hansal Mehta’s Chhalaang and its new song, ‘Deedar De’ for example, which is pictured on its leads, Nushrratt Bharuccha and Rajkummar Rao. The song, as most of you would know, is not an original but a ‘remix’ of a song by the same name featured in Anubhav Sinha’s Dus (2005).

The original song Deedar De from Dus, composed by duo Vishal and Shekhar and sung by Sunidhi Chauhan, is an out-and-out item number. It featured Puerto Rican dancer and actor Mayte Garcia, who was spotted by director Sinha when he was scouting for talent for the song in America. The song features in the film when the characters played by Abhishek Bachchan, Zayed Khan, Suniel Shetty, Esha Deol and Pankaj Kapur are looking for the illusive Jamval, the terrorist, and find themselves at a night club.

Now music composers today can use whatever fancy-shmancy word they want for it, or cite dus bahane like, “Arre ye toh trend hai” to justify themselves. The fact remains that there’s a very slim chance of 2.0 being more successful than the original. The public is literally screaming “Nahi chahiye humko teri second-hand jawaani”. Did you become composers to use someone’s else’s work or create your own original compositions?

Here are five thoughts we had about the new ‘Deedar De’ from Chhalaang.

Okay, yes, Nushrratt Bharuccha is looking smoking hot in the song. But what’s this obsession with heavy focus on the actress’ bosom, be it the camera angle or the dance step? FFS, we’re in 2020, can we get over this unnecessary objectification push-lease? We get it, boobs are awesome. Flaunt ‘em if you got ‘em. But must there be OTT heaving and going out of the way, like opening shots centered on them, to highlight them?

Also Read: Nushrratt Bharuccha’s Promotional Looks For Chhalaang Are All About Comfort and Class. It Basically Defines 2020 Fashion For Us

2. Forget good or bad, why are we remaking cult Dus songs in the first place?

Remixes are pretty much a pandemic for Bollywood’s music industry. And Anubhav Sinha’s Dus apparently has been infected twice. First was with that abysmal ‘Dus Bahane 2.0’ in Baaghi 3, featuring Tiger Shroff and Shraddha Kapoor in the remake of the cult title track of Dus. They ruined the lyrics. They ruined the hook step. It wasn’t an homage, it was practically a carnage. And now this.

What is the saying? If you love a flower, the worst thing you can do to it is pluck it? Well, if you loved the song so much, why would you ruin it by remixing it? Like, how does this brainstorming process go? Do they go to T-Series roster, scroll through old songs and arrive at the one that hasn’t been remixed yet? Where are your original ideas? Do you not have faith in your talent that an original song made by you would work?

I’m just putting it out there. Dare you touch the movie and try to remake it next.

The only thing they’ve retained from the original ‘Deedar De’ is the chorus line. Baaki sab toh badal diya. But if that’s what you wanted to do, might as well have written yourself an entirely new song! I mean I don’t see people in the future saying, “DJ Waley Babu, OG Deedar De nahi remix wala chala do!”

4. Why have anyone other than Sunidhi Chauhan sing the song?

Everything else aside, if you really wanted to leverage the popularity and appeal of the original, you could’ve just gotten Sunidhi Chauhan to sing the new version too. I don’t know much about this business, but since I am its consumer base, I’m confident that that would be a much better bet.

5. It doesn’t really fit the vibe of Chhalaang!

I heard the other songs in the album and I actually thought they were good. The title track is apt for a sports movie that this one is. Even ‘Care Ni Karda’ is so cute and romantic; I love the lyrics and the chemistry between Nushrratt and Rajkummar! I don’t know why we needed ‘Deedar De‘ in this mix.

It doesn’t even go with the whole vibe of the movie, which is about a teacher in the small-town he finds his motivation to do his job better. Ismein ye semi-item song kahan se aaya, yaar?

Anyhoo, I’mma go watch the OG ‘Deedar De’ from Dus. Here, you do also. I know you want to.