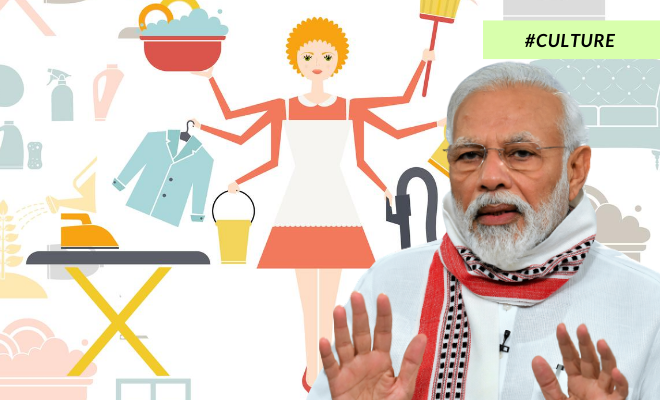 #Culture : Mumbai Woman Petitions PM Narendra Modi To Urge Men To Do Their Share Of Household Chores In His Next Speech. Because Atmanirbhar Bharat Begins At Home!

Hey ladies, what’s up? Done with the jhaadu-pochha, khana banana, and kapde sukhaana for the day? Did anyone help you with it or once again was it just you and your tanhai? And most importantly, are you ready for the worst Bigg Boss task of them all—doing those damn bartans at the end of the day that pop up every time someone so much as utters the word ‘food’? There, there. If you’re one of those millions of women (where’s the lie?) who have become the de facto designated driver of your household ship, without the men in the house lifting a finger to help, there’s a very tiny ray of hope. A woman from Mumbai has petitioned the nation’s big boss, PM Narendra Modi, that in his next speech, he ask the men to become atmanirbhar and do their share of ghar ka kaam.

And when I say petition, there’s a legit Change.org petition that has been started by Subarna Ghosh.

The petition has already received some 70,000 signatures from exhausted women. There’s a target of 75k for now, and I have absolutely no doubts that it will have achieved its target before the day’s up. Why, you ask? Because.

Alright mitron, pay attention! Ever since the lockdown began, families have been holed up at home. That’s safe and amazing; great, please don’t go outside if you can avoid it. But once inside, can everyone at least try and carry their own weight when it comes to a division of the household chores? Apparently not. With all the family members indoors at all times, they’re shedding more dead skin and hair, eating more food that spills everywhere, dirtying the bathroom more, using more utensils, and basically turning the house into one of those zoo enclosures where animals are caged. Naturally, the responsibility to cook those meals and clean up after everyone falls to the women of the house. Thanks, patriarchal gender roles.

It’s worse if you throw little kids in the mix who have to be taken care of. And outright unimaginable for the ones who on top of everything else are also holding down jobs by either stepping out or working for home. That shit ain’t easy, and these women are already burning out as they suffer from the ‘Double Burden Syndrome’. Yes, it’s a thing. No, I did not make that up. Women are actually suffering from stress and anxiety, quitting their jobs and setting their careers back by years because of this.

Also Read: #Voices: Study Says Women Who Work From Home Suffer From ‘Double Burden Syndrome’ Where Deadlines And Domestic Duties Are Both Their Responsibility

Now, before you gang up on me with “Not all men…” yes, I am aware there are men who don’t think helping with household chores is some magnanimous favour they’re doing to women. But let’s face it, the majority of them have let women be the flagbearers of ghar ka kaam because that’s how we roll in Patriarchy Town. I won’t even blame it all on the men. As the story of Preeti auntie and her son Akshay from Indian Matchmaking taught us, it is usually mothers who enable this sexist behaviour by telling their raja betas that their mothers, sisters, wives or sisters-in-law will do home-flix while the menfolk chill.

At this point, it isn’t even a matter of gender equality anymore than it is a simple house rule—if you live in the house, you gotta do the work. Even if every manchild learns to clean up after themselves, the women of the world would heave a collective sigh of relief that could be heard from outer space. Is that asking for too much? Didn’t think so.

Unfortunately, all the appeal that women have done via feminist revolutions, tweets, Instagram posts, Facebook lives, and in person have failed to garner men’s attention to share the load of housework. But we’ve all seen the tweets that claim our Prime Minister national addresses have magical properties, and he can get us to do even the most unfathomable things. You know, like banging thalis, lighting diyas, abandoning currency overnight and what not… And looks like that’s what prompted this petition!

In a nation where millions hang on to every word of the PM and do whatever he asks, I hope @PMOIndia @narendramodi will today ask Indian men to do an equal share of housework. Aatmanirbharta starts at home! @SubarnaGhosh #PMSpeech #ChoresHaveNoGender https://t.co/3DgBpm1bNX

I’d say, kudos to Subarna for coming up with this cool idea. It’s been a while since the Bigg Boss house has gotten any new tasks. Maybe the PM’s PR vehicle can come up with a creative solution to make contributing to household chores fun or incentivised? My suggestion would be to just slot this idea under the Atmanirbhar Bharat campaign- Men’s Edition. Ask men to become #VocalForLocal by helping keep their immediate locality, i.e. their homes, spick and span, and learn some cool skills like cooking (more than chai and Maggi puh-lease), cleaning (that splatter is annoying) or doing the dishes (no need to hit the gym for those forearm workouts).

After all, just like charity, even Atmanirbhar Bharat begins at home!

Also Read: As A Woman, I’ll Always Choose Working From Office Over Work From Home. Here’s Why.