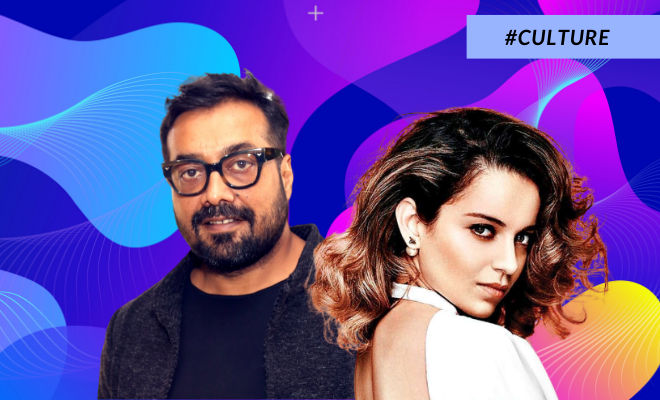 Kangana Ranaut’s tireless crusade to seek justice for Sushant Singh Rajput makes her an Avenger to her fans. And with almost every second person in Bollywood inserting themselves into this… entanglement of opinions and quest to capture moral high ground, consider this Bollywood’s own edition of Avengers: ‘Infinity’ War. Except, looking at the way things are escalating, there’s no Endgame in sight for this one, folks. From here on, it only gets uglier. Kangana’s explosive interview with Arnab Goswami, where she opened the proverbial can of worms, has triggered a lot of reactions from the industry. Most recently, from filmmaker Anurag Kashyap.

In a series of tweets (written in the Devanagari script for some reason), the Choked director expresses his shock at one of her older interviews from around Manikarnika’s release. They were friends before, but he claims this new Kangana is a person he cannot recognise anymore, because she’s trying to toot her own horn and trashing those who chose to dissent.

The filmmaker claims he isn’t here to berate the Panga actress, but is speaking up because he cares for her and cannot see her go up in flames when all this comes crashing down, dragging her reputation with it.

Kangana’s interviews, which have grown increasingly explosive, have garnered support from her friends, sister Rangoli Chandel and her fans. But according to Kashyap, they’re doing her more harm than good by encouraging her. Or probably, they’re trying to egg her on to take advantage of her. In the end, he says he is okay if Kangana wants to take his advice or leave it, or abuse him verbally for what he has said.

Post Anurag Kashyap’s seemingly heartfelt message to Kangana, the usual suspects dropped in to support and abuse him. There was Ashoke Pandit, who called Kashyap a term he has been called often on Twitter—Urban Naxal. Got me very confused what that had to do with his stance on a Bollywood matter, but okay.

And then when I saw copy pasted tweets from random accounts, tagging the same old video of Kashyap taken out of context, to prove that he was being a chameleon and changing his stance against Bollywood insiders now that he was a part of their clique, it struck me. Of course, how naïve of me to think politics wouldn’t be involved here. Codependent relationship toh hai hi cinema aur rajneeti ka!

Watch how #AnuragKashyap
talks about how he had to fight the "Big Insecure Bolly Families" who did not want outsiders & today he's in denial & is attacking @KanganaTeam. Plz have a look at this @republic @ishkarnBHANDARI @Swamy39. Truth does eventually come out #SushantTruthNow pic.twitter.com/tJ2DaHn3dX

Oh and since Kashyap is divorced, of course, that also came up. Because it is so important.

As journalist Anna M Vetticad pointed out, the current trend is to troll and personally attack anyone who speaks against Kangana Ranaut. However, as she and several other people have noticed, the more insidious pattern emerging here is that every time the narrative shifts to address the real issue—mental health, depression, and the audience’s apathy towards Sushant Singh Rajput’s movies before his demise—it is immediately hijacked to make it all about Kangana’s vendetta against Bollywood.

Issues we should discuss in the context of Sushant's death (mental health, elitism in Bollywood, nepotism in India, #caste in all Indian film industries) are now lost in a din of I-me-myself + abuse hurled at anyone who steers the focus away from #KanganaRanaut & back to Sushant. pic.twitter.com/mYwnaDJ20u

Tell me, #SushantSinghRajput's genuine fans, is it your belief that Sushant – who took a stand on Hindutva-Rajput extremism – would have approved of this? 👇🏾 What explains such tweets being sent by those who claim to be fighting in his name? #nepotism #outsiders #KanganaRanawat pic.twitter.com/SocmuNFKMu

Okay, let me ask you guys, are you tired yet? Because I am. Professionally, I cannot put my pen down, because duh, this needs to be chronicled. But personally, as an outsider looking into Bollywood, this whole thing makes me nauseous and gives me heartburn. Why are we fighting other people’s battles for them? Bollywood is such a secretive camp in itself, that two people who portray themselves as enemies on social media could pretty much be sitting next to each other at a party, and writing hate tweets over drinks about the other! And we, gullible folk, think we’re making a dent in the universe by taking sides, defending them, and launching personal attacks?

No one is rattled – some of us are just disgusted by the banshee-like wailing from fake fans who never cared about Sushant before he died and this cottage industry of opportunist vultures that has sprung up, exploiting his tragic death to settle personal scores and gain mileage.

For those fans, genuine fans not the fake ones, of Sushant Singh Rajput, who actually went to the theatres and watched his movies like Sonchiriya, if you really want to make a difference, don’t waste your time on what his peers have to say about him. You’re never, I repeat, never going to know the whole truth about what happened. Instead, the narrative will spiral uncontrollably into the absurd, with people hijacking it to further their own agenda. Instead, support the outsiders in the industry by buying tickets to their movies, watching them, and talking about them incessantly.

Stripped naked, Bollywood is ultimately a business. The only way to make an impact is to bring in the moolah. Remember how you had to vote in Indian Idol to make your contestant win? This is exactly like that. Spend your money to save your favourite star. Otherwise, cribbing years later that Amit Sana should’ve won instead of Abhijeet Sawant never helped nobody.