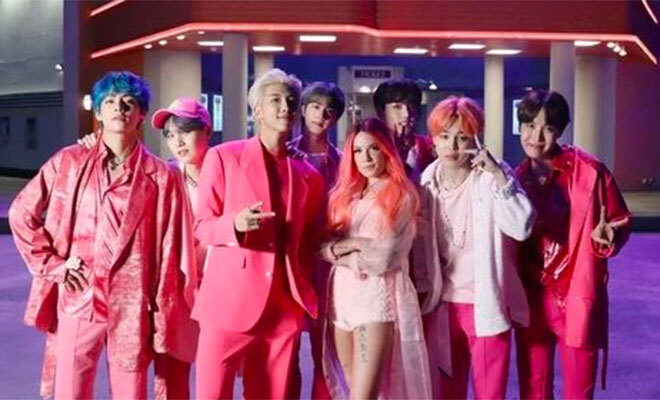 Everyone is already aware of the massive popularity of the South Korean boyband BTS aka Bangtan Sonyeondan. The Bangtan Boys consists of seven members – RM, Jin, J-Hope, Suga, Jimin, V, and Jungkooka are talented in their own unique ways and make the band one of a kind and globally successful. And we have great news that will surely make the BTS ARMYs super proud of their boys. BTS achieved yet another milestone in their career, their hit song ‘Boy With Luv’ reached 800 million streams on Spotify and became the first-ever Korean song to hit this milestone.

When the group released the catchy song ‘Boy With Luv’ featuring Halsey, the internet went crazy and we couldn’t stop ourselves from dancing to its amazing beats. The song is the lead single for the group’s sixth mini-album titled ‘MAP OF THE SOUL: PERSONA’ which was released in April 2019. On February 6, the hit track ‘Boy With Luv’ has officially hit 800 million streams on the global music streaming platform, Spotify. With this, the song has become BTS’ first Korean song to reach this mark and also the first-ever Korean song to cross 800 million streams on Spotify.

Take a look at the song here:

The song ‘Boy With Luv’ is the second song of BTS to reach this milestone after their hit song, ‘Dynamite’ which was released in 2020, currently the song has 1.2 billion streams. After that, BTS has become the only Korean act to have two songs crossing 800 million streams in Spotify history.

Talking about the BTS, the group is all set to release the full version of the new song ‘Stay Alive’ which is produced by Suga and sung by Jungkook for their webtoon 7 Fates: CHAKHO.