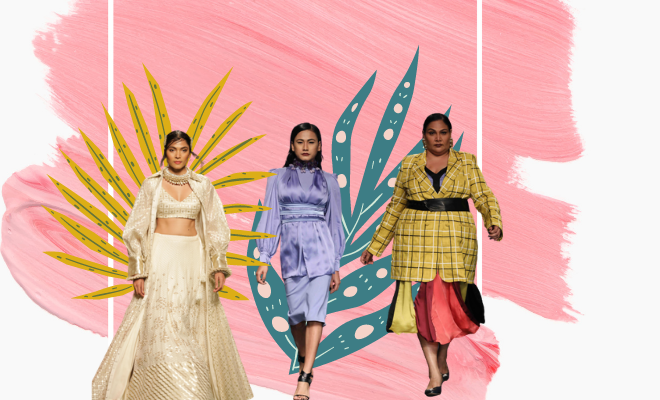 As Designers Abandon Celebrity Showstoppers, Models, Clothes And The Craft Gets The Spotlight On Virtual Runways. About Time

I was a kid when I watched the movie Fashion by Madhur Bhandarkar, and all I could think was why Kangana Ranaut’s character Shonali was stopping every fashion show. I get that she plays a supermodel, but didn’t they have celebrity showstoppers to culminate the show? Little did I know, having a Bollywood celebrity as the showstopper was a trend that was just picking up at that time. Now, every designer has a Bollywood star to showcase the best outfit from their collection. It gets them the media attention and fame, sure. But it takes the limelight away from their craft. But virtual runways, like the ones we’re seeing at the FDCI, are changing that.

This is how an average fashion shows looks—the show begins with the designer’s fashion film, music plays, lights go bright and the models start walking down the runway. The eyes of the fashion buffs are on the collection and the models. Then, for a brief moment, lights go dim, music changes and you instantly know there’s going to be a celebrity showstopper. And, there she is (or he, if it’s menswear) strutting on the ramp in a dazzling outfit, the best one from the collection.

Bollywood stars end up stealing the spotlight on the runway that belongs to the clothes, the models and the craft of the designer. This is a superfluous trend that the designers have been considering forgoing for a while now and some ace couturiers like Tarun Tahiliani have already skipped having a star for their show since last year. However, with the introduction of virtual runways due to the COVID-19 pandemic, this is becoming the new norm for fashion shows. And, this new normal, we like!

Also Read: Tarun Tahiliani Took A Cheeky Dig At Celebrity Showstoppers At His Show And We Love It

What’s a showstopper? I looked up the actual meaning and it says “… an act, song, or performer that wins applause so prolonged as to interrupt a performance.” Which means someone who steals the show, taking the attention away from the actual thing. Celebrity showstoppers make for the perfect distraction on the runway.

This celebrity business on the runway is a trend only in the Indian fashion industry. On international runways, you almost never see a celebrity showstopper in a fashion show. The clothes and the models are the stars on the runway, and movie stars show up mostly at movie events. Fashion industry’s obsession with Bollywood stars, no wait, India’s obsession with Bollywood stars is what propels designers to get a celebrity for their show to make it extravagant and talk of the town.

The recent FDCI Couture Week, however, has been a breath of fresh air, for it lacked the presence of any celebrity face, and the models and the collections got to shine, for once. Due to the pandemic, the fashion week has been taking place on our screens over social media. Designers like Amit Aggarwal, Gaurav Gupta and Shantanu and Nikhil, who almost always have a celebrity showstopper, went against the grain for their virtual runways. The result was that the collection and the models got the fair due and attention, which was much needed.

It was late designer Wendell Rodricks who started the trend and thought of it to be the worst decision. In a session titled ‘Voice of Fashion’ at the Lakme Fashion Week, Rodricks had said, “In 2004, I started this stupid thing called showstopper. I put Malaika Arora on the ramp for the finale of that collection called ‘Fashion Democracy’ and I was ridiculed. I was threatened and was sent nasty letters saying how can you take this star into the press room. So, in 2004, when I put her on the ramp, I didn’t know I was starting this horror story called showstopper because I hate that word now.”

Having a Bollywood star on the ramp trivialises the models who are the backbone of any fashion show. The modelling industry has taken a serious hit since celebrity showstoppers have become ‘the only thing to look forward to’ in these fashion shows. Lubna Adam, a famous fashion show choreographer and former model, says “Over the years, models haven’t been covered by the media at fashion shows. They don’t have an identity anymore; nobody is being highlighted and this also affects them when it comes to commercial ads. So nobody stands out, because they are not being marketed that way.”

The trend might have been started by Rodricks but is now being followed by the likes of Manish Malhotra, Rina Dhaka and Ritu Kumar, who always end up having known faces as their showstoppers. And, it works for them as well. The outfits worn by celebs sell like hot cakes even after years. On the other hand, Anita Dongre, Tarun Tahiliani and Manish Arora are some of the big names in the fashion industry who have had successful shows sans Bollywood stars.

The celebrity showstopper syndrome is real in the fashion industry, and many designers are diagnosed with it. Whether they attribute it as a show of their friendship with the stars or a trend en vogue, the reason behind having a celebrity showstopper is definitely putting their show and collection out there and bringing it a moment’s fame. However, one of the good things to have come out of this pandemic is the realisation that you don’t need Bollywood stars in your show. The biggest designers have had showcased their work on virtual runways without celebrity showstoppers and hopefully brought a new wave of change in the industry. After all, the models, collection and creativity are the showstoppers, and it should stay that way.

Also Read: At LFW, Designers Discussed Celebrity Show Stoppers And How It Ruins The Show. We Certainly Agree That Designers Deserve The Limelight!