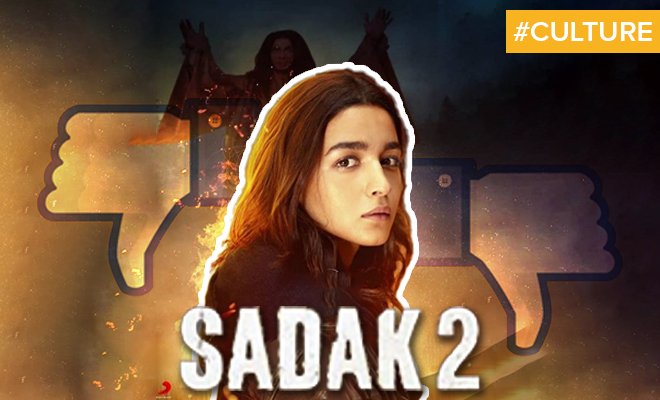 Alia Bhatt’s ‘Sadak 2’ Trailer Getting 6.2 Million Dislikes On YouTube Is A Frivolous Argument Against Nepotism. It’s Never Just One Actor’s Film, Is It?

When the crusade against nepotism was spearheaded by Kangana Ranaut earlier, she became the butt of memes and jokes. She was asked to take a chill pill and focus on her work. But the death of Sushant Singh Rajput changed the narrative. Today, a singularly motivated audience has managed to generate 6.2 million (last we checked) ‘dislikes’ on the Sadak 2 trailer. With just 22 million views and 366k likes, it’s now one of the most disliked videos on YouTube. Produced and directed by Mahesh Bhatt, the film stars also Sanjay Dutt, Pooja Bhatt, Aditya Roy Kapoor Jisshu Sengupta, Makarand Deshpande, Priyanka Bose, Mohan Kapur, Gulshan Grover and Akshay Anand. It will release on Disney+ Hotstar on August 28.

The sequel supposedly picks up the story of its 1991 predecessor, Sadak, which starred Sanjay Dutt, Pooja Bhatt and Deepak Tijori and Sadashiv Amrapurkar. The film was one of the highest grossing films of its release year, and Amrapurkar even won a Filmfare for his negative role. Sadak 2 marks Mahesh Bhatt’s comeback as a director after nearly two decades (Kartoos, 1999). Let’s not forget, this is the first time we’ll see Alia being directed by her father, and the father directing both his daughters. With such a legacy, and an ensemble like this, the film was one of the highly anticipated releases for 2020. I can imagine, had things been different, what the promotions would look like for the movie. Alas, everything is quiet, except for basic social media announcements.

The first question you’d have to ask when you see a film trailer being ‘disliked’ is pretty straightforward. Was the trailer that bad? In Sadak 2’s case, I’ll be judicious and non-presumptuous and say that it’s okayish. Those who’ve seen Sadak would realise how and where the story picks up, and might even understand the spiritual similarities in the sequel, with a godman as the main antagonist. TBH, it reminded me of Sacred Games a lot too, with its whole immoral godman arc, played by Makarand Deshpande. Did it make me curious to watch the film? Sure, why not. Did it blow my mind? Nope, not really. But did I hate it so much that I took the pain to hit the ‘dislike’ button? Ummm, I don’t think so.

I mean, give or take a few thousand people who do this for the heck of it, the chief reason for the dislikes has to be blind hatred towards its cast and makers, particularly Alia Bhatt and Mahesh Bhatt. Alia, for the sheer virtue of being the star-kid who is a Dharma Productions’ prodigy and close to Karan Johar, has been trolled incessantly since SSR’s tragic passing. Her jibe against the Dil Bechara actor during an episode of Koffee With Karan is being shared and re-shared to keep it fresh in public memory that she allegedly dissed him on national television. As for her director father Mahesh Bhatt, his name has been coming up in the whole Rhea Chakraborty – Sushant Singh Rajput fiasco that is currently playing on our news channels and WhatsApp group chats.

What beats me every time something like this happens, is how people forget that the film doesn’t belong to just one actor or director. There are a bunch of people who’ve put their blood, sweat and tears into making the movie. And by dismissing it so brashly, without even giving it a chance to put all its cards on the table, seems like the most frivolous use of our veto power as an audience and consumer. Nepotism is born out of the needy human emotion to raise our own friends and family to opportunities instead of others, even if they are deserving. But by giving into this blind outrage of trashing a movie just because of one or two people, we’re only furthering a culture where emotions rule the moviemaking business instead of talent.

What happens to the careers and livelihoods of the other crew members who’re awaiting the fruits of their labour? Do we leave them to a fate as bad as SSR’s? Because that’s exactly how their mental health could suffer if a movie they worked for doesn’t do well on the box office, not because it was a bad film but because the audience had a vengeful agenda against it!

Also Read: Amidst Nepotism Backlash Against ‘Gunjan Saxena’, Janhvi Kapoor Refuses To Be Apologetic About Her Work. She’s right.

What’s more, it would be understandable if this reaction spawned from legit reports that the cast/crew of the film had anything concrete to do with what happened to Sushant Singh Rajput. The investigations are still ongoing, and to dismiss their work based merely on speculation makes us, the audience, look foolish and gullible. How does downrating a video help? Publicity, whether is is positive or negative, is still publicity. The film is still going to be talked about; it will still release; and people will still watch it. Yes, the very people who are tweeting and commenting about how much they hate nepotism will actually watch it in the privacy of their homes. Who’s going to know if they did or did not boycott? Moreover, with Sanjay Dutt’s lung cancer diagnosis, this and his other releases like KGF 2, will surely not be missed by Bollywood buffs!

If none of this convinces you, let me tell you how YouTube works. The more negative publicity the Sadak  2 trailer gets, the more people are going to want to see it, even if just to hit the dislike button. Which automatically makes it the #1 trending video in India! See what you did there? Let’s also not be naïve and realise that when you arrive on the trailer’s YouTube page, non-skippable ads will begin playing before you can watch the video. And this only means more money for the video posters, ICYMI. How exactly did you help out the cause here? Do you feel a little silly now?

Instead, watch the movie and then lay out an informed, educated criticism? If the movie makes you doubt Alia Bhatt’s acting skills (which so far no argument has pointed out because, let’s be honest, she is a good actor), then that’s a pretty solid point against nepotism, isn’t it? Gunjan Saxena was another movie that bore the brunt of trolls and trashing, because Janhvi Kapoor, also a star kid, was deemed unfit to be cast in a role of a national hero after being just one film old. Now you can let the nepotism debate deter you from watching the movie. Or you can watch the movie and appreciate the brilliant acting by Pankaj Tripathi and Viineet Kumar Singh, both industry outsiders who’re turning into the most coveted actors of the moment! Not to mention, the film has a beautiful message that should not be missed, especially by the social media trolls who’re going to mock me for taking the side of the ‘nepo-kids’ in this article.

Also Read: Gunjan Saxena: The Kargil Girl Is A War Film Alright, But With A Very Different Flightpath. And It Nails The Landing.

So you want to wage a war against nepotism in Bollywood to get justice for Sushant Singh Rajput? Did you troll and abuse star kids on social media? Did you downrate movies like Gunjan Saxena: The Kargil Girl and Sadak 2 because they star and are produced by industry insiders? Ban gaye ‘baaghi the rebel’ tum? Congratulations. You’ve accomplished nothing at all. If anything, it feels all the more juvenile, and not the antics of an audience that really wants to make a difference. Bollywood needs to change, but then, the audience needs to grow up too, no?

PS: Before I get accused of being nepotistic, I have absolutely no relationship with Bollywood insiders despite the shared last name!