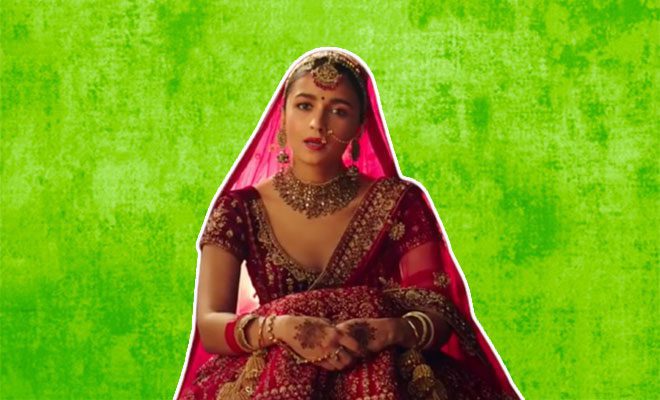 Alia Bhatt’s Mohey Ad Raises Valid Points About Marriage And Patriarchy, Even If It Does Feel Like Tokenism

Those who know me, know my love for weddings. I’ve always enjoyed the fun vibe, the food, etc. But there is always one point that I hold back from criticising—the rituals. I always thought that I had a slightly different outlook on the rituals. But eventually, I realized that most women have, at some point, questioned the part of the ritual that includes ‘kanyadaan.’ Growing up, us girls, at some point by someone in our family, have been told that we don’t belong to the family we were born in. The most common statement that we’ve heard is that women are ‘paraya dhan.’ And our movies and TV serials have not made any efforts to change that mindset even now, rather they have affirmed it time and again. But the latest ad for clothing brand Manyavar Mohey, featuring Alia Bhatt, raises valid questions and points about this patriarchal mindset around kanyadaan, even though the tokenism is kinda evident.

Recently, Alia Bhatt who is the brand ambassador for Mohey, the bridal wear brand of Manyavar, was spotted in another ad wherein she she questions the entire mindset of women being ‘paraya dhan’ and the ritual of ‘kanyadaan.’ The ad raises a lot of valid points with respect to the way we view our daughters and how we raise them in the patriarchal mindset that says girls belong to their husband’s family always, and parents of the bride have to ‘give her away’ in a ‘kanyadaan’ as if she were some property.

In the Mohey ad, Alia Bhatt plays a bride sitting in the mandap at her wedding, as the rituals go on. She mentions every member  of her family—grandmother, father, mother—and how they’ve always showered her with love. But also, they’ve told her statements that every girl in our country has heard growing up. ‘When you’ll go to your own house we’ll miss you’, ‘a daughter is paraya dhan’ or like a ‘chidiya’ that has to fly away some day, and so on. And then there is the part where she questions the tradition of kanyadaan. She questions why girls are made to feel like they don’t belong, or like property. She asks why is it that a woman is told that they are a temporary part of the family. In the ad, she questions, “Am I a thing to be donated? Why only kanyadaan?”

And then, it is her mother-in-law who, through her gestures, indicates that she understands what the bride is feeling, and thus is born, ‘kanyamaan’, a ritual where not just the bride but the groom is also given away by his parents. Equality.

Watching the ad, there is no doubt that the questions and points that the ad raises are extremely important and valid. They are justified and something that everyone in society should be asking themselves. But at the same time, there is no denying that when these points that question the ritual of kanyadaan and talk about paraya dhan come from a bridal wear brand, which is part of the wedding industry that capitalises on weddings, which in itself is a patriarchal institution, it feels like tokenism.

And that is because the entire entertainment industry – be it Bollywood or television serials – for years have sold misogyny. In fact, not only them but also wedding brands also perpetuate the whole idea of a bride’s special day and that concept in itself is patriarchal in nature. The entertainment industry and wedding industry have time and again affirmed the themes of a daughter being paraya dhan and that they’re a temporary part of the family they were born into.

In fact, after the Mohey ad starring Alia Bhatt hit social media, a lot of netizens did not shy away from commenting on the ad. While some were supportive and glad that such questions were raised in an ad. There were others who attacked it for being ‘woke feminism.’ Most of the latter who decided to call out feminism had issues only because they believed the ad to be anti-Hindu. Which is a whole different trove of problematic thinking. The ad isn’t hurting any religious sentiments. Brides across religions are made to feel like they are properties that are being ‘given away’ by their parents.

I am honestly glad that a new-age actor like Alia Bhatt has raised such important questions regarding kanyadaan. As a society, we need to stop telling our daughters such things and make them feel as though they don’t belong. But this change will only take place when the entertainment industry and wedding industry stop selling misogynistic ideas and patriarchal perspectives to their ideas. The ad in itself is a change bearer but that doesn’t take away from the fact that it also feels like tokenism and sounds way too preachy.