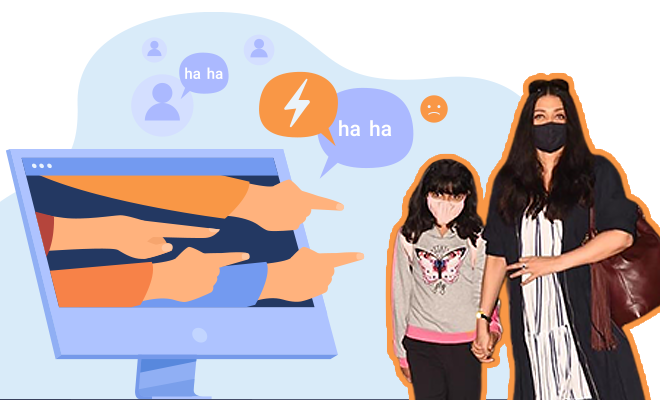 Aishwarya Rai Bachchan Gets Trolled, Called ‘Overprotective Mother’ For Holding Aaradhya’s Hand At Airport. What Even?

If you ever thought that being a mom is easy, we have news for you. It isn’t. Here you are juggling work, house and your kids, believing that you are doing your best, while there is a whole world out there ready to pounce on you and judge your parenting choices as a mother. This is even worse for celebrity moms. While a dad’s parenting skills are rarely paid heed to when they are watching their kids (I mean at least they are watching, right?), moms are constantly criticised, and for the silliest things. From hiring a nanny for their kids to holding their hands in a public place, celeb moms are trolled mercilessly. Ask Aishwarya Rai Bachchan, who has been on close watch even since she became a mother. First she was trolled for her postpartum weight, then for carrying her toddler daughter, Aaradhya in her arms and now it is for holding her daughter’s hand as they walked through the airport. This is so unwarranted.

The actress was recently spotted exiting the airport with husband Abhishek Bachchan, and while doing that, was holding her daughter’s hand like any mom would do if there were a dozen paparazzi swarming over them to take pictures. However, some netizens found it unnecessary and argued that she is being overprotective of her daughter. A user commented on one of the photos on social media, “She’s still holding and treating her like 3 yr old kid,” while another wrote, “YOU should let go of her hand. We know, you love her but she can walk on her own. SHE IS GROWN NOW. Not trying to be rude but you really need to relax now.” We think it’s the trolls that need to relax and stop dissecting and judging every single thing these celebrity moms do.

Holding your kid’s hand isn’t being overprotective. That’s what any responsible parent does. In fact, that’s what every person who cares for you does. How come we find a celebrity actor holding the hand of his girlfriend in public cute and adorbs. Isn’t she a grown up too? But we don’t label him as an overprotective boyfriend, rather we flood their pictures with #couplegoals comments. However, when a mother does it, she is branded as an overprotective mom who needs to chill. Also, we are pretty sure if she had left Aaradhya wandering on her own at the airport, she would have been accused of being a reckless mom and trolled for bad parenting. You can’t win! It’s crazy how people think it’s okay to judge a mother for literally everything she does.

This is not the first time that Aishwarya has been trolled and given unsolicited advice from the so-called parenting experts on social media. From letting Aaradhya wear makeup to kissing her on the lips, the mother-daughter duo has been projected to unnecessary hate and harsh comments time and again. In 2019 too, the trolls slammed the actress for holding her daughter’s hand while stepping out of a restaurant and labeled her overprotective. And after two years, here we are again. Maybe it’s time to leave the celeb moms and their kids alone and keep our opinions and advices to ourselves. Celebrity or not, every mom is doing the best they can to raise their kids right and keep them loved and protected. So, let’s give it a rest, shall we?

Also Read:  Navya Naveli Schools A Troll Who Asked Her What Work Her Mother Does. Her Response Was Sassy AF!