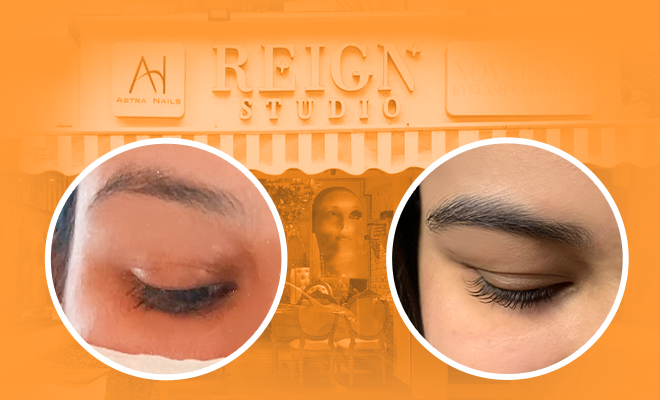 Lash Lift: Everything You Need To Know About This Beauty Procedure

So I got my lashes done. Yep, you read that right. For the first time in my life, I got my lashes done and I felt old because I was so back on this trend. Why? You ask Because I naturally have long lashes so I never thought of messing with them at all. I have only enjoyed watching videos on Instagram where women wear fake lashes, do extensions, and get their lashes lifted to the end of their lashes are tickling the ceiling. In fact, I also recently started getting nail extensions as well and I absolutely LOVE it now. But then that was nails and these are lashes. Closer to the eyes so what if a real-life final destination situation happened with me? Yeah, I was this scared.

So, I got an opportunity from Reign Studio by Novalash in Bandra to experience getting lash extensions done. While I was a little scared, I was also excited to get my lashes done. I assumed I would go there and this woman would just spin her wand around my lashes and boom I will look more gorgeous than I already do. But it took me forever to find a place that was right in front of my eyes and that is obviously on me because I am so geographically challenged. *Stresses in geography*. An eternity later when I finally found the place, I walked in like I just fought for our country. I looked like a mess and not even a hot one. But then let’s not digress. As I entered the place I was amazed by how lavish and gorgeous the whole place looked with vintage chandeliers and quilted cushions on the wall.

I get to speak to the staff who are by the way really sweet and nice and you will instantly feel comfortable with them. Initially, I wanted to get extensions but I was in two minds whether I should or shouldn’t since I already have long lashes. One of the staff members recommended that I go for lifting instead and I was like,”Sure, I want to look like a filter.” He escorted me to one of the sections where I would have to lie down and I see him fixing up all the instruments in place while my paranoia was growing. Once I laid down I was hoping for a woman would come along to do the service but to my surprise, it was this guy who was going to do my lashes. Not that I have a problem with men doing my services but this one time I went to the salon and was getting my pedicure done when this dude looks up to me and judges me for having undone feet and I was worried he would judge my lashes.

I have already seen a lot of videos on social media about lifting eyelashes and I almost knew what would happen. As I laid down there was a liquid that was sprayed over my eyes for cleansing. Then he stuck a sticker over my lower lashes and I’ll be honest I was scared that they will be waxed, but nothing of that sort happened. My lower lashes are safe. He then started to stick silicone patches over my lid. He then started to apply a liquid over my lashes that smelled a lot like feviqwik. And then the curling began. After a lot of curling and liquid applying during which I had to play dead for about half an hour, I was itching to see what was going on. I’ll be honest I had the urge to open my eyes at one point but I had to resist because apparently you can’t do that while getting your lashes lifted. Ugh.

Some half an hour later the guy finally started to clean the glue off my lashes and did 2 final curlings before I could reincarnate and I have to say that I absolutely loved how my lashes looked. They were lifted and gorgeous and how! I definitely do not regret the decision of getting my lashes done. I was a little scared at first but if I was asked to do this again I won’t even hesitate or think twice about it! Novalash by Reign Studio also offers lash extensions and also deal with brows and microblading. You should totally check this place out and get those lashes done!