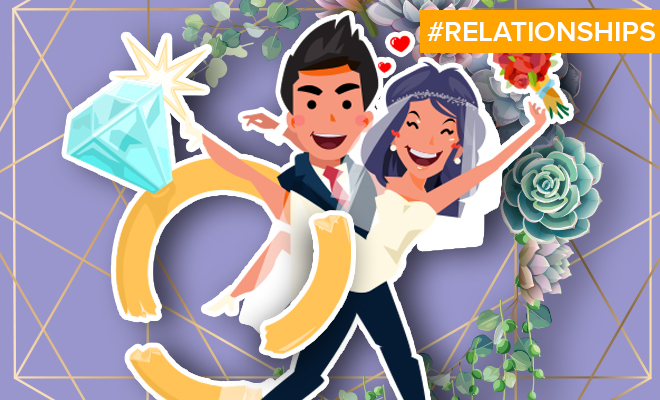 This “Self-Married” Woman Returned To Her Ex-Fiance. Confused? Here’s Decoding Sologamy And Being “Self-Partnered” For You

The earliest I heard of someone getting married to themselves was when Carrie from Sex and the City decided to go the sologamy – the act of marrying yourself – route. And why did she do that? Because all those years she kept buying gifts for her friends for a variety of occasions: engagement, wedding, baby shower, etc. And she wondered, why nobody was celebrating single women.Why do you have to be married to be congratulated? And the woman had a point. So you announced her marriage to herself! It does make sense, right? What if I never get married to another person? I can still committed to loving myself and treating myself right.

Cut to today, Nicole Russo, a woman who had broken up with her fiancé and married herself is making news since she has returned to her ex, Paulo De Souza. She said she couldn’t handle her insecurities back then. Someone in India wrote about it saying her reason was “difficult to comprehend.” I am not surprised though because most people won’t even understand the concept of self-love, so self-marriage is still farfetched. “I made the choice to honour and commit to myself and now I’ve done the same with Paulo,” Nicole told Metro.co.uk.

“People have asked me questions like, ‘Am I cheating on myself?’ I’m not sure if they are just wanting to be sensational, or are being very simplistic and old-fashioned in how they are thinking about marriage, but I always tell them it’s in the definition,” said Nicole. She further added, “My marriage to myself is not the same as my one to Paulo. It’s not a legal marriage, nor a traditional one with a church and a big white dress. Rather, it’s a way of committing to and loving myself.” Self-marriage is ridiculed by many because they don’t understand it. This isn’t a romantic relationship. Neither is it narcissism. It is you offering that love and commitment to yourself – the kind you’d offer another person. That honestly isn’t so bad looking at the fucked up millennial dating we are dragged into.

The first person who made news for sologamy was an American woman Linda Barker who married herself in 1993. Social researcher Janeen Baxter, from the University of Queensland, told ABC that this is a way of challenging gender stereotypes and how single women are seen as incomplete. “One way to rebut traditional gender roles is to rebut the necessity of a relationship as a defining feature of identity,” Professor Baxter said. They further added, “Often very successful women are defined in the media in terms of their relationship or motherhood status. High profile women who do not follow a traditional model are seen as oddities and somehow not a ‘real’ woman.”

ABC also quoted Linda Doktar, a self-connection coach who married herself in a ceremony in 2017. She said it doesn’t mean she won’t have a partner in future but to celebrate self-love. “It was never about being by myself for the rest of my life. It was a ritual. The intent was a deep honouring of myself, healing and self-love,” she said.

Why are more women than men marrying themselves? “Clearly women feel much more pressure to be married [in order] to feel validated as women and adults. The mythology of completion on your wedding day with the dress, the ring, the man—these are all the stories that are sold to girls from day one in a way we don’t sell them to boys. So there is a deep anxiety and longing in women for a ritual of acknowledgement. I believe men, too, love to be seen and acknowledged, but marriage just doesn’t have the same weight for them,” self-married woman, Sasha Cagen, who is also a life coach told Vogue. Erika Anderson, another self-married woman clarified that it isn’t a way of pulling down men but women declaring autonomy. “I think women marrying themselves might seem incredibly threatening because it looks like we’re saying men are irrelevant. But we’re actually just saying that we matter,” Anderson explained to Vogue.

Last year, “self-partnered” became a legit relationship status after Emma Watson claimed it as hers. Women who married themselves say that they feel complete like they are not waiting for “the one” anymore. Which makes sense because we are constantly very aware of our relationship status. We get anxious that we still haven’t found a match and women who marry themselves claim to have let go of that worry. They are not waiting for another person to give them the love they desire. They are not waiting for another person to do something special for them. Or to take care of them. Women are saying they can do it all for themselves and be a whole person without a man and children. Because for the longest time, media and society have been sympathising with single and childless women as if we are unhappy. Even though Jennifer Anniston has declared she is happy and content, she is still called “poor Jen” by people and media.

For those of you who are curious to know how it works when a self-married woman meets a man she likes, they are open to dating and even marrying people. It isn’t really cheating and no they are not practicing abstinence. “People think if you marry yourself you gain a nun status, but obviously if you’re a nun you commit your body to God. This is committing yourself to yourself. You can still love everyone else. Some people ask if I’d divorce myself, but divorcing yourself is being in the worst place you could be. That’s when you don’t ever want to live with yourself again, which is akin to suicide, really. I’m not going to get to that point. So would it be polygamy? I don’t know how it fits, but I’m open to a relationship or potentially marriage,” Sophie Tanner, a novelist told Vice.

Yes, it’s not a conventional concept and several self-proclaimed gatekeepers of traditions criticise it for mocking the institution of marriage. I mean, I really don’t know about how this is a mockery. What I do know is that there are several people mocking this institution and none of it is seen as problematic. Honestly, I don’t see me interfering or giving my opinions on someone else’s choice of lifestyle. And I think overall, people should stop concerning themselves with who others marry – be it a person of same sex, different caste or self.

ALSO READ:This Man Decided To Take His Wife’s Surname After Marriage To Keep Her Family Name Going. Where Do We Find Men Like These?