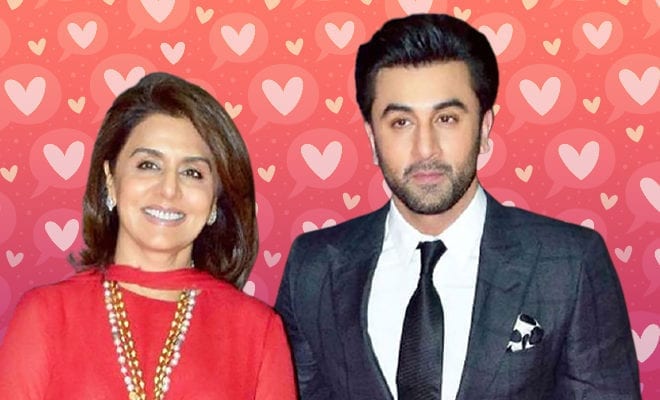 Neetu Kapoor On Ranbir Kapoor’s Past Relationships: “He Is Too Soft. He Can’t Hurt Anybody.”

Is it just me or desi moms feel their sons are just chaand ka tukdas? I know all parents are biased but the kind of pampering sons receive from their moms is just baffling. No matter what their son does, he is flawless and they never stop seeing him as an innocent child. This is amusing because if they knew the kind of things he’s doing outside, they will know he is not as innocent as they think he is. Why is it so common in India that Indian mothers feel so protective of their sons? And the way they scrutinise his relationships and freely offer advice because somehow they see most women as competition or vamps out there who may take advantage of their masoom beta.

If that’s the case then why are so many women being taken advantage of? Who are these fuckbois in our dating pool because if you ask mothers, each one of them have a raja beta? I am sorry but you know what? Women would really appreciate if you don’t put your sons on a pedestal because we absolutely do not want to bear the consequences of all that.

Indian mothers are so protective of their sons, they feel their delicate child must be protected at any cost from the wrath of another woman. How many mothers-in-law jump to defend their son in a fight that doesn’t involve her and is between the husband and wife? How many mothers-in-law especially tell their bahus to take care of her son? Oh, why is he cooking? Did you make him breakfast? Mere bete ko sirf cornflakes diye? Aww, poor baby, mommy will give you parathas. I am sorry but these women getting married are there to find a husband, not adopt your child. And then the desire to always have an upper hand and ownership is the kind of battle most young women are not interested in.

Unfortunately, excess of love and pampering affects their son’s relationships. It’s not easy to fill his mother’s shoes and most of us don’t want to. And that constant feeling of having to seek his mother’s approval and validation is harrowing.

We know how close Neetu Kapoor and Ranbir Kapoor are. It’s evident. We also know she has opinions on his relationships and dating life. Recently, as reported by Filmfare, Neetu Kapoor exhibited her biased mommy side by talking about how her son Ranbir Kapoor cannot hurt anybody. Speaking on his past relationships, she said, “He is too soft. He can’t hurt anybody. It’s the same with his relationships, he does not know how to say no, and gets into the deep end! I see it happening and can do nothing about it.”

Did she happen to read an interview in which Ranbir Kapoor admitted to having cheated on his girlfriend, possibly Deepika Padukone? “Yes, I have cheated, out of immaturity, out of inexperience, out of taking advantage of certain temptations, out of callousness. You realise it now, when you grow up and you value it more why be in a relationship, why be committed to someone when you cannot be committed?” Ranbir Kapoor had told Stardust magazine in 2011.

Has she watched the episode of Koffee With Karan in which Ranbir Kapoor admitted to having slept with his friend’s girlfriend? I am not judging him on his past mistakes (not like it matters!) but simply pointing out that this human being is capable of hurting people. And he has hurt his girlfriends in the past. I believe his mommy’s comment comes from a place of bias and disapproval.

Neetu Kapoor also spoke about how she gives him relationship advice. “First time he felt involved, I knew the girl was not right for him. But when I told him, he rebelled. So I learnt to tackle it another way. I told him don’t get serious so soon, the more you see the more you know and learn, so meet many girls and go out with them, but don’t commit yet. But I have learnt to not be an irritant. I say it once and move away. It works,” she said.

Wait, so Ranbir Kapoor must date a woman his mom approves of? Isn’t it a bit much to tell your child (who is a full grown adult, btw) what to do in his relationships? And yet, that’s such a common thing in Indian households. Alia Bhatt has always been sweet, nurturing and friendly with his mother or so it seems. Is that why she approves of her? I know Neetu Kapoor means well and is just biased like most Indian moms are. She can’t help it! But really, it will help several women if mothers don’t think that their sons cannot hurt anyone.

Even if they do something bad, it’s somehow the woman’s fault. She must have instigated him. She must have brainwashed him. Let your sons be a little responsible and end this internalised misogyny because our generation has had enough of it already.

ALSO READ: BaeWatch: “My Mother-In-Law Expects Me To Handle The House Like She Does. I Can’t!’

She had said in an earlier interview: “I was very troubled in my married life. I think he (Ranbir Kapoor) must have been 15 or so, when Rishi and I went through a really bad patch. I have always felt that while my daughter should be innocent and learn to face life as it comes, my son should be street smart and know everything about life. So I would sit with Ranbir and talk to him.” Does anyone see anything wrong with this? Gender bias much?

“For hours, I would tell him all I felt was right and wrong with my marriage, try to explain it all to him. I think he was my best friend then, my only confidant. I would talk my heart out to him, as to no one else. He changed then I think, suddenly became responsible, grown-up. I felt he should know everything, for one, it would make him a good husband when the time came,” she added. That sounds a little scarring for 15-year-old child, honestly. “Sometimes the fights would get really bad. I would be sitting on the steps, my head between my knees, till five or six in the morning, waiting for them to stop,” said Ranbir Kapoor.

Here’s wishing him healing and taking charge of his relationships!

ALSO READ: In This Old Interview, Ranbir Kapoor Opened Up About His Breakup With Deepika Padukone And How He Bottled Up His Feelings. We Can Relate.