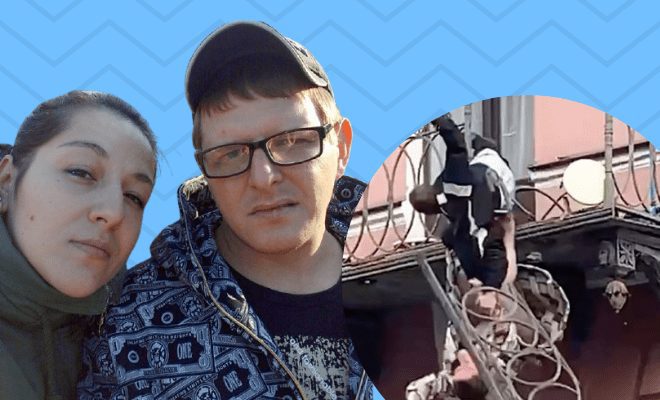 Couple Fall Down 25-Feet From Their Balcony During A Fight

Every couple bickers; that’s just how relationships work. You love, you fight, you make up and you love some more. I mean, ideally, yes. There was a time when I was dating a guy so annoying and toxic that it used to drive me nuts. Like I am a calm person and very few people can fry me enough for me to really start quarreling. This guy had it in him; it was almost like he was picking fights with me and refusing to let it go. However, after that, I hated being that way and we broke up. Since then, I make sure even when I argue with my partner, we both do so with controlled speech and without just throwing verbal knives at each other. This Russian couple though took angry fights to a whole new level.

They not only got physically aggressive with each other but fell off the balcony while at it. Maybe they needed the divine intervention!

The couple was captured on camera, having a fight on their second floor balcony at 10 in the morning. Geez, some people are just not morning people at all! The video shows their fight got aggressive and the railing broke off, leading to them suffering a 25-feet fall onto the ground.

The video was recorded by a passerby, who was probably intrigued by the early morning fight happening between the couple. Passerby Denis told Komsomolskaya Pravda newspaper: “I was walking with my colleague and filming the historic street view. I noticed the row and began to shoot when this happened.” However, things escalated quickly as within no time, the couple was on the ground with several injuries.

Luckily, there was a medical practitioner around who checked their pulse and found them to be alive. An ambulance was called and the couple was rushed to the hospital. The couple suffered from several injuries including broken limbs but nothing life-threatening, except their toxic relationship!

ALSO READ: This Ukrainian Couple Handcuffed Themselves Together Because They Were Fighting Too Much

The couple are identified as Olga Volkova and Yevgeny Karlagin, both 35 and they have a young son together. Meanwhile, the authorities are looking into the matter as in if the railings were not maintained or poorly fitted. It might lead to charges against those responsible.

However, can we look at the real issue here? The couple is aggressive and they are parenting a young child who may be very well psychologically impacted by it. Someone refer them to a therapist!

ALSO READ: 7 Things That Happen When You Cheat Even If Your Partner Doesn’t Find Out