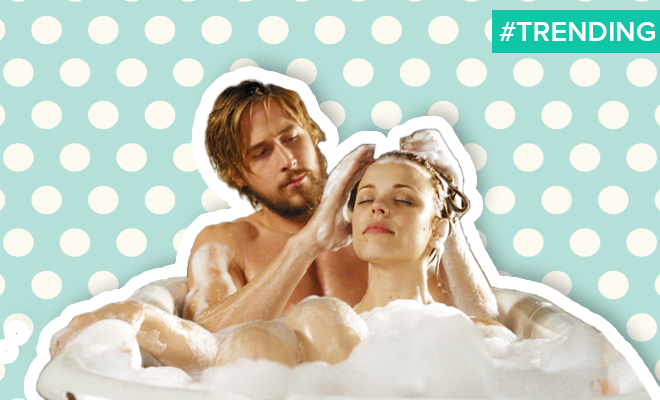 Confession Alert! I Let Bae Wash My Hair And It’s The Kind Of Intimacy Everyone Should Experience

When I first stepped into the shower with bae, I had no clue how this works. I guess none of us did. Like are we supposed to make it all steamy? Are we really going to take a shower? Damn, nobody told us the rules. So we decided to do what we like. And turns out, the shower is an amazing time to share intimate moments. I am at my happiest anywhere close to the water and I may probably never date a guy who doesn’t like being in and around water. Because how the hell will I have tiny water fights when we’ve just turned on the geyser and the water is still cold?

I love sharing a shower because you’re just taking it slow, kissing his wet lips, goofing around and checking yourself in the mirror and thinking, ‘damn, we look hot together.’ But turns out, bae and I would prefer actually bathing while at it. Just to make it a little more teamwork, he slathers the soap on my back and I do the same for him. But then, one fine day, bae decided to wash my hair. It was like being at a salon, except you’re home.

How do you feel when you’re at the salon and someone is washing your hair? I can totally fall asleep. It’s just so relaxing. It makes it even better when that someone is not a person getting paid for it. This someone is your cutie who has nothing to gain in massaging your head while shampooing your hair. He was very thorough with it.

He selflessly enjoyed it

I bet he wouldn’t say “enjoyed” per se but it was a nice feeling. He had never shampooed another person’s hair before and it seemed like this won’t be the end of it. Because guess what? Pampering each other really brings you closer because you’re pleasuring the other person without any motive.

He got a hair wash too

I sat him down and washed his crown because a guy deserves some pampering too. I massaged his head and used all the techniques I had experienced at my salon and boy was he impressed. His face had the calmness you find near a quiet lake, with the sound of just birds filling the air. I think it’s just that when you do it in your own comfort zone with a person you can be naked with, it feels even more relaxing. You know how you need to be completely relaxed to have an explosive orgasm? This is like having a scalpgasm. I loved seeing that soothing smile on his face and I guess that’s probably why he enjoyed pampering me too.

It’s the kind of intimacy that goes beyond sex

I always say physical intimacy isn’t about sex; it’s about letting your bodies whisper sweet nothings to each other. It’s feeling vulnerable and secure at the same time, with the same person. It’s being naked and not feeling naked with them. It’s about sitting on the bed, butt naked, and casually having a cup of cappuccino while watching TV. Intimacy is being in the shower together and actually taking a shower, without worrying about looking like a drenched penguin. And when you wash each other’s hair with so much care, it just makes it even more comfortable.

But it kinda does set the mood for sexy time

Being a demisexual, my horniness large depends on my mood and how lovingly I feel for him. If something has annoyed me, I probably won’t be willing to give it my all in bed even after we’ve made up. At least, not until those creases are ironed out with some love and affection. And what happens when I feel pampered and adored? I can jump his bones! If I feel love and care, it puts me in the mood for some tongue tennis and maybe he can get some pampering under the sheets too. So while he was massaging my scalp so gently, I was kinda getting in the mood to go the naughty route. And when I washed his hair, it was also very sensuous (although it was just soothing and adorable to him). I don’t know why! Like I wouldn’t say pampering each other in the shower is like making-me-wet kinda sexy; but it really makes you like your partner a lot more at that moment, which pretty much leads to some makin’ out.

ALSO READ: 10 Thoughts I Had When I Tried Making Out In The Shower. PS: I Loved It.

It’s romantic to do things for each other

It doesn’t really have to be hair wash. Just another person doing things for you seems warm and comforting. Like if he puts nail polish for me or if help him do his tie. Or he braids my hair or fastens the hook of my bra (unhooking is too mainstream). I love these things!

ALSO READ:#Relationships: 7 Signs He Is Not Just Having Sex But Making Love To You