Why We Are Loving The New Jonas Brothers’ ‘Sucker’. And It’s Not Only Because Of PeeCee! 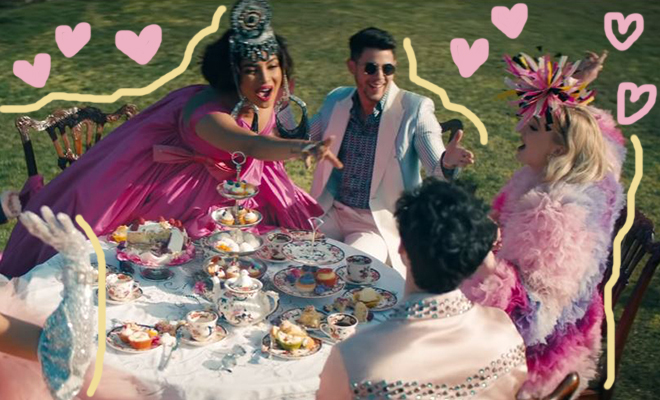 Let’s admit it. NickYanka had given us enough #couplegoals to last a while. This while we dejectedly swipe left on all our matches. Just when we thought, okay, the weddings are over and ‘love’ month is over and we don’t have to see anything mushy for a while, the Jonas brothers released a new single that’s giving us all kinds of goals.

The Jonas Brothers released their latest single ‘Sucker’ after almost a break of 6 years and we honestly can’t take our eyes off the screen and we are smashing that repeat button.

The three brothers can be seen in what looks like a spin off on the Alice in Wonderland theme castle, in larger-than-life costumes alongside their respective wives and fiancés. First of all, how cute are these three couples? And how amazing is their chemistry.  Plus, they are bringing out their Mad Hatter-esque side and we are loving it.

It was expected that our desi girl Priyanka Chopra would make an appearance, what with her being a Jonas and all now but we love how much fun the couple looks like they’re having. Then there’s the nostalgia. The comments section is filled with 90s kids reliving their childhood through this number.

Also, the song is actually nice. The kind you would want to shake a leg to but also the kind you can sing carpool karaoke with. You know, versatile.

Priyanka Chopra also posted a snippet of the video on Instagram with the caption, “This is the first time we’ve worked together but not for a moment did it feel like work. Such a fun family affair…” For us too, PeeCee!

The #JSisters , Joe Jonas’s fiancé Sophie Turner, Kevin’s wife Danielle Jonas and Priyanka Chopra Jonas,  perhaps found the perfect way to show support and love for their partners, giving us some major family goals. There’s so much family in it, Sooraj Barjatya might have directed it.