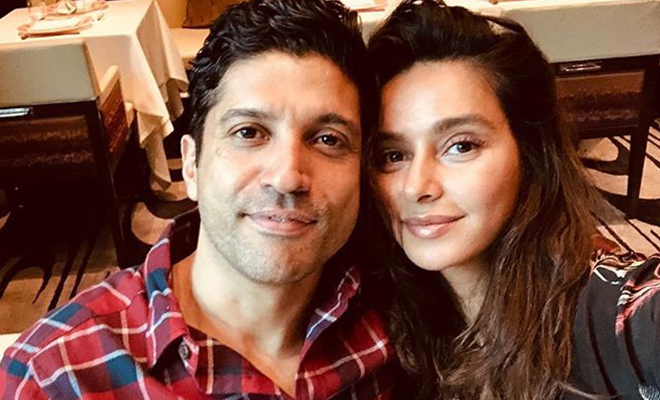 We Have All The Details Of The Farhan-Shibani Relationship Right Here!

Valentine’s day is just around the corner and as a single person, this week and otherwise, I am dragging my feet. Everywhere I look, there are couples. Couples being cute, couples holding hands, couples exhaling. Ugh. After much deliberation, which is our fancy way of saying crying, at lovey-dovey pictures of real life couples , we have settled on stalking celebrity couples as the most effective way to not feel too bad about our own love life, or lack thereof.

Ours and nation’s current favourite couple being Farhan Akhtar and Shibani Dandekar! Here is all there is to know about their relationship.

Farhan and Shibani met back in 2015 during the shoot of TV show I Can Do That, that was then being hosted by Farhan Akhtar.  Shibani was a participant. There was speculation but the dating rumours did not start making the rounds until last year in September, when Shibani posted a picture on Instagram holding hands with a mysterious someone. Who most people guessed was, well, you know.

Even though the rumours started heating up with Shibani’s post, Farhan Akhtar posting the same picture on his own Insta handle in October with a love emoji, sealed the deal and publicly announced them being in the throes of love! Aww.

Ever since the two have come out of their shells, they’ve been giving us major couple goals, by literally being joint at the hip. With you know, their lazy Sunday or the hand-in-hand appearances they’ve been making at DeepVeer wedding receptions.

The couple also seem to have been getting are getting cheesy and romantic. Farhan Akhtar posted a picture with Shibani with a poem that went like “Tum muskuraado zaraa, chiraag jalaado zaraa, andhera hatado zaraa, roshni phailaado zaraa”
What is the procedure to procure a boyfriend like this?

At the recent Gully Boy trailer launch, Farhan Akhtar had our curiosity piqued when he shared how he would be making an important announcement at the launch, though you would think it would be a less public event for a relationship announcement. Of course, we are speculating, it could be about his next movie. But hey, we are easily excited. We can’t wait to find out!