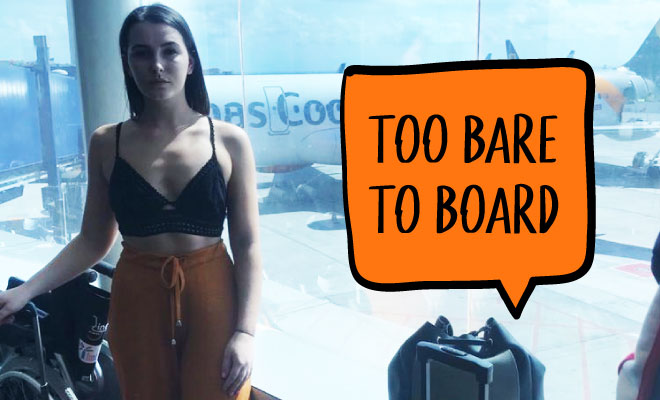 We Asked Indian Airlines What ‘Appropriate’ Clothing For Women Onboard Is. Cover Up! Apparently

Having been fed a healthy diet of Bollywood thrillers and Nancy Drews while growing up, I have always been inclined towards being the detective kind. While most of my thrilling cases were about who finished my donuts from the fridge-  always my brother btw – to more elaborate cyber stalking to find  all the dirt in the world on my best friend’s boyfriend, I have evolved as a sleuth.

Now that I am a writer, I decided it is time to kick things up a notch. Letting the investigative journalism juices flow, I believed it was time to dig deeper and find out the answer to a pretty trending question on the minds of every female passenger right now– what is it that they can wear and not be kicked out from a flight? Whose morality are we to consider when dressing up for a journey? What is the least offending piece of clothing that will please all and sundry and allow me to take my seat to my destination. The mind is boggled. This plays on our mind right now because crop tops are seemingly offensive to the cabin crew, so much that they threaten women with offloading if they don’t cover up.

We are talking about the British woman Emily O’ Connor who on her recent Thomas Cook flight, was told she would be escorted out if she didn’t cover up her crop top immediately. And while she was already being embarrassed as such by the cabin crew, there was a man sitting two rows ahead of her who shouted, “Shut up you pathetic woman, put a f***ing jacket on.” The girl is only 21 and a bunch of people stood around her telling what she was wearing was deemed inappropriate. Clearly, passenger comfort is a priority for this airline. After almost 20 minutes of hounding and harassment by the flight crew and passengers, she finally wore a jacket lent to her by her cousin and only then was the flight allowed to take off. The airline later apologised to Emily, saying they should have handled the situation better. You think?

Of course, this was annoying to us and what we wear should be none of their business but we decided this was worth some probing. We want to clear the air (pun intended) by finding out the most appropriate flight wear. So, we took out our glasses, phone recorders and some time to make calls to three Indian airlines to get in the know of what we’re lacking, you know, apart from a few extra layers of clothes.

And while Air India, IndiGo and SpiceJet spend millions trying to tell us all about the ways in which they’re different from their competition, they happened to be quite same when it came to what was okay to wear on board. So much that after a point, I could’ve been speaking to any of them, the spiel sounded so familiar.

They started fine, with me having to be on the line for close to 10 years to get a customer care executive to talk to me. After that, I carefully framed my question and asked “What is that I am allowed to wear on the flight?”. The people on the other end, after struggling a little with the kind of question they were just asked, replied in the most assuring way possible as they told me that I could wear anything that I feel comfortable in and the choice relies entirely up to me.

A good start I thought, except I still didn’t think they were entirely honest. So I further told them, how I was presently in Goa and was considering travelling in my beachwear. This is where things got interesting. Because as soon as I said that, I was put on hold for a good 10 minutes, because I am assuming that is how long it took them to process my request, only to be told that they were extremely apologetic for they could only allow people to wear ‘decent’ clothing, and beachwear or shorts and a crop top for that matter, don’t qualify. At some point, one of them *may* have murmured ‘Log kya kahenge?’  Okay, that didn’t happen but it might as well have.

While consoling me with their fickle sorrys, they also helpfully commented on how they didn’t think I’d make it past the airport authorities in beachwear, let alone to the flight. I face palmed so hard, you can see imprint of my fingers on my face.

Not sure who we are trying to please dressing modestly on airlines, but apparently it’s a thing and we can do nothing but fall in line. Because god forbid anyone sees what my tummy might look like. That’s an emergency of another kind.

GET HAUTERFLY IN YOUR INBOX!
Related ItemsFeatured