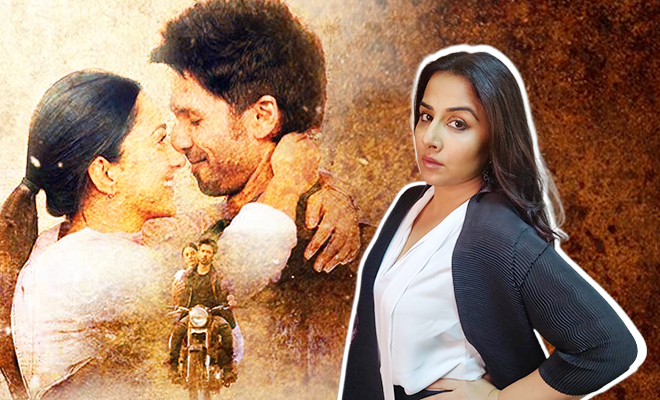 Vidya Balan Shares How She Didn’t Like Kabir Singh Getting The Girl In The End. Thank You For Being Honest!

Ever since Bollywood dropped one of its most problematic movies on the box office in June, the infamous Kabir Singh, I have had a bone to pick with the film. From it angering every cell in my body to pushing me to write compelling and hard-hitting stories, only to be hit back with a series of threatening DMs for it from angry fans, Kabir Singh and I have ended up in some sort of abusive relationship ourselves. And while there are a number of things that have made my opinion against the movie solid as a rock, Vidya Balan says she has only qualm with the film.

The Mission Mangal actress, who has always picked up strong roles in content-heavy movies, recently stepped up to share her views about Shahid Kapoor starrer Kabir Singh. Now, the world and even the cast and crew of the movie knows how disturbing and deeply problematic the film was. So naturally, when Shahid’s former co-star was probed about all the controversies that surround the movie, she said “I personally didn’t like the fact that she takes him back at the end of the film. But that’s my personal view.”

And boy do we agree with her. The plot of the movie was obviously skewed and dipped in patriarchy, misogyny and chauvinism and even if we were to let that go (we didn’t but let’s be hypothetical for a moment) the fact that Kiara Advani takes him back and ends up with Shahid Kapoor’s character in the end is painful. It notably proved the fact that behaving the way Kabir did throughout the movie, which was like a fucking immature pig, will ultimately be rewarded in that he gets the girl anyway.

And that is where our ‘feminist’ problem becomes a problem for the entire society. Because the thing is, that even if we understand the fact that this is fictional, even if we dismiss it as just a movie, we can’t ignore the fact that Bollywood celebrities and cinema play a major role in shaping and influencing the minds of this generation. To feed them a character like Kabir Singh is deeply problematic because if it ends well for him, it shall imply that abusive relationships end well for everyone. To show that no matter what, at the end of the day, this psychopathic and creepy behaviour will always get you the girl is sending out all sorts of wrong messages to people.

Actress Vidya Balan, though did commend Kiara Advani for her acting and said, “I called her up and told her she did a great job. Especially for a city bred independent girl who’s not like Preeti, to play it with so much conviction is the best thing about being an actor. Hats off!” But even she couldn’t hold herself back when it came to actually reviewing the movie for its terrible and anti-climactic ending.