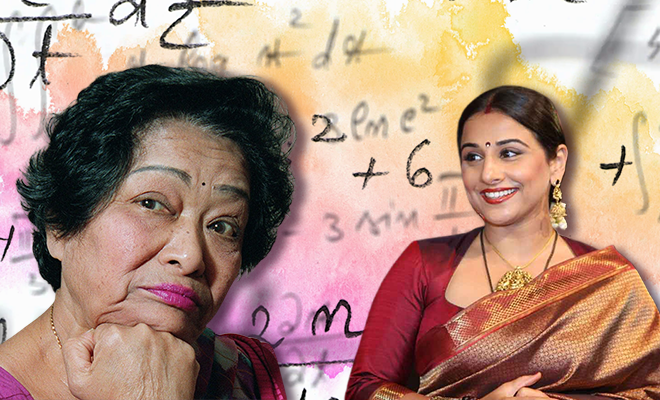 Right from her unforgettable presence in her debut film Parineeta, the immensely talented Vidya Balan changed the game for women in Bollywood and continues doing the same. Vidya Balan has been a part of films like, The Dirty Picture, Tumhari Sulu, Kahaani, Bhool Bhulaiyaa and of course Mission Mangal, and each of her characters in these films have made us believe that hers is a talent that we simply don’t see enough of. The actress may have taken breaks from films but her performance in her recent film, Mission Mangal made us want to see more of her on screen and her forthcoming film will have you hooked.

Also read: Vidya Balan Shares How She Didn’t Like Kabir Singh Getting The Girl In The End. Thank You For Being Honest!

Vidya Balan is all set to play the role of  a “human computer” in the Shakuntala Devi biopic directed by Anu Menon. Vidya Balan is gearing up for her role with dedication and she was recently clicked in a brown saree and short bob for her look test for the film. The Parineeta actress is really excited to sink her teeth into this role, whilst adding her own charm to it. Speaking of how she feel she’s apt for playing the role, she said, “I will get a bob to look the part. So the curly bob and my classic South Indian face is a good match for the part.”

The supremely talented actress has been rejecting movies before as she wasn’t liking any scripts been offered. When asked Vidya Balan on what made her want to sign the film, in an interview with Mid-Day, she said, “What drew me to the subject was her magnetic personality and the life that she led. I am playing her from her early 20s till the fag end of her career.” Ooh, this sounds interesting!

According to Wikipedia. ‘Shakuntala Devi was born in Bangalore, Karnataka to an orthodox Kannada Brahmin family. Her father rebelled against becoming a temple priest and instead joined a circus where he worked as a trapeze artist, lion tamer, tightrope walker, and magician. He discovered his daughter’s ability to memorise numbers while teaching her a card trick when she was about three years old. Her father left the circus and took her on road shows that displayed her ability at calculation. She did this without any formal education. At the age of six, she demonstrated her arithmetic abilities at the University of Mysore.’

We can only imagine how fun this retelling of her life is going to be.

Her last film, Mission Mangal is killing it at the box office and has already made 128.16 crore on its 8th day itself. Vidya Balan was appreciated for her part in her film, as someone who used home science techniques to make her mission succeed. The diva legit was the highlight in the film and we are looking forward to this movie.