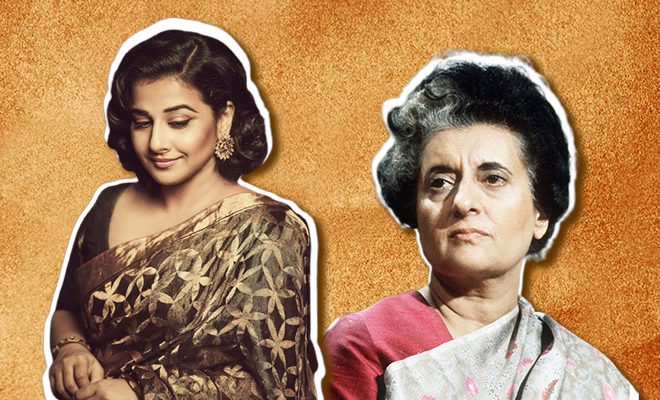 Vidya Balan Is All Set To Play Indira Gandhi In A Web Series, Calls Her The Most Powerful Woman

We’ve all collectively admired Vidya Balan for being real and unfiltered in an industry where people shy away from reality. Vidya Balan has evolved as an actress and looks like she’s becoming the go-to person for biopics currently. We all know that Vidya essayed the character of Silk Smitha with utmost conviction in the film, The Dirty Picture. Now the immensely talented actor will be seen stepping in the shoes of Indira Gandhi and Shakuntala Devi soon. Her outing as Indira Gandhi marks her debut in the digital space.

Also read: Vidya Balan Exposes The Dark Side Of Bollywood, Shares Her Horrifying Experience With The Casting Couch

When asked about what drove her to play the character of our former Prime Minister, she said, “When I think of powerful women that (Indira Gandhi) is the first name which comes to my mind. I am very party agnostic. I have nothing to do with any political party. This (web series) is not about any political party, this is about an individual who goes beyond the party.”

While Vidya Balan was interacting with the media at the launch of author Minnie Vaid’s book, ‘Those Magnificent Women And Their Flying Machines,’ the actor was seen having a candid conversation with the media about both her upcoming film. When Vidya Balan was asked if she will start shooting for her upcoming web series soon, she said, “(It will start) Not very soon. It’s going to take time because it’s a web series and that requires a lot of work to put things together. So, it may take a couple of years to start the shooting.”

Vidya Balan was last seen in Mission Mangal where she was playing the role of a scientist at ISRO, and will now play the role of a renowned mathematician, Shakuntala Devi. Speaking of both her films she said, “From science to maths, my best dream comes true this year. Most South Indians pursue science and maths, and I am sure my parents will now be satisfied that I traverse both worlds within one year faster than rest of them did!”

“It (the preparation) is not about maths. Anyway, I am going to fake it. They (the makers of the film) are going to give me the answers that I am going to write on board. I think I need to be familiar with the person. She was the only computer in the world with a sense of humour. She had a wicked sense of humour so, I am actually trying to imbibe that quality. She also had an incredible journey so, I am feeling nervous about playing the character in the film,” said Vidya on her preparation for Shakuntala Devi.