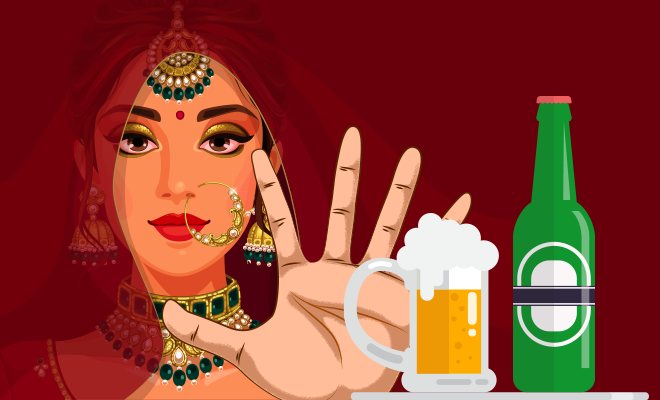 Police In Uttarakhand To Offer Brides Up To INR 10,000 For Saying No To Alcohol In Their Weddings

The thing about weddings, at least on my side of the family, is that they are incomplete without alcohol. Till the time a drunk relative doesn’t jump up to dance with a glass of whiskey on his head, accompanied by two more attempting a sad snake dance, the wedding feels like it is missing something. And while over the years, people have learnt to love with and even enjoy the stereotype, it comes with its own set of problems. Ones that go beyond unsolicited uncles dancing and go up to them creating nuisance for other guests. An upcoming cause of concern, especially in the Uttarakhand area where the police have come up with an innovative way to bat this problem out of the park.

Launched under an initiative called the Bhuli (‘sister’ in Garhwali language) Kanyadan, the Devprayag police in Tehri Garhwal district of Uttarakhand have decided to discourage the trend of cocktail parties during weddings in the rural areas by coming up with a plan that is hard to resist. Their idea is to reward brides who object to such parties at their wedding events with a cash prize.

As lucrative as it is thoughtful, the idea is the brainchild of Devprayag station house officer Mahipal Singh Rawat, who has introduced this way to keep the alcohol consumption during weddings in check. The police station will be looking at offering a reward of ₹10,001 to the bride for holding an objection to booze parties at her wedding functions.

Rs 10,001 for brides in Uttarakhand who refuse to serve alcohol at weddings https://t.co/k68C3f4meB via @TOICitiesNews

Rs 10,001 for brides in Uttarakhand who refuse to serve alcohol at weddings https://t.co/byL27oUlUv

Also Read : A Woman Who Has Never Had Alcohol Is Need Of A Liver Transplant Because Her Body Produces Alcohol On Its Own

The reward money would be pooled in by the staff of the police station. Mahipal Singh Rawat who came up with the idea also shared the ideology behind the initiative as he said, “Of late it has been observed that people in the rural areas in the hills, just like people in the urban areas, are also organising cocktail parties which has now become a trend. It often causes arguments, quarrels and fights at weddings. To stop such things, I decided to take the step.”

He also said, “In weddings in hilly areas, it was more about celebrating culture and rituals with love and affection. But now that has been replaced with these cocktail parties which is not a good sign. We hope this initiative will curb the trend and people will focus more on celebrating the rituals and culture.”

Let’s see if the monetary incentive is enough to keep this trend at its curb.

Also Read : A Woman In The UK Smashed Over 500 Alcohol Bottles In A Supermarket. We Don’t Know What She’s Going Through, But We Relate