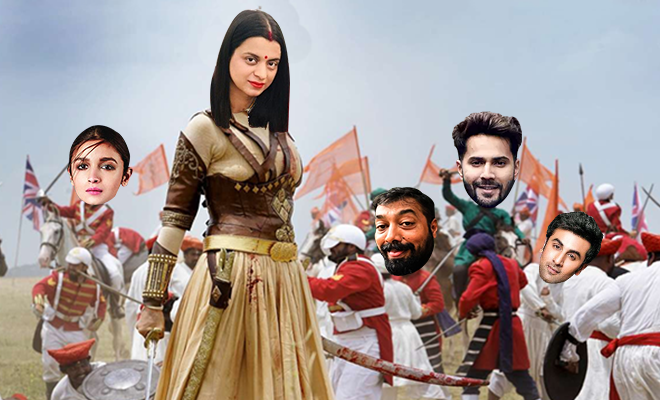 Unsuspecting Celebs Have Been At The Receiving End Of Rangoli Chandel’s Twitter Rants. Someone Log Her Out!

It’s not just the Hrithik-Kangana controversy about which Rangoli Chanel rants on Twitter. She takes to social media, unleashes undue hate on unsuspecting victims who have crossed her path and makes them the target of her Twitter rants. Bollywood has been bearing the brunt of Rangoli’s rona dhona and it seems like none of them have made it out. They’ve all been dragged through the mud in this dirty game.

If you even remotely cross paths with her, and she happens to be in a bad mood, she will throw her textual knives at you! Also, if you happen to say anything about her movie, or Kangana’s movie and not tag her, even if it’s appreciative she will find you and tweet to you. Here are several Bollywood personalities who found themselves featured in Rangoli’s infamous rants.

While we believe Rangoli and Kangana both are always sitting with their guns loaded, firing at people who mean no harm is just not cool. They dragged Varun into a dirty fight, when all he did was tweet positively about Kangana’s upcoming movie Judgemental Hai Kya. Apparently, his only mistake was that he assumed that the world is smart enough to understand his tweet.

We’re glad Varun saved his energy and did not get into an argument with someone who fires blindly.

Kuch log Kangana ko copy kar ke he apni dukaan chalate hain, magar pls note, they never acknowledge her not even a mention of her name in praising the trailer, last I heard Taapsee ji said Kangana needs a double filter and Tapsee ji you need to stop being a sasti copy ? https://t.co/5eRioUxPic

So, basically, Rangoli is going around terrorising anyone who will tweet anything about her dear sister’s upcoming movie without tagging Kangana in it. It’s so confusing! Taapsee praised the trailer too, like Varun did, and boy was that a mistake.

Sir you can see it’s not about mentioning Kangana so much, clearly lot of people I have thanked haven’t mentioned her, it’s just that I am tired of people taking digs at her, who is this Taapsee to claim that Kangana needs double filter….(contd) @anuragkashyap72 https://t.co/YRSd3MhcYH

When Anurag Kashyap decided to intervene, Kangana’s sister and self-appointed Twitter-cum-Bollywood monitor, Rangoli lashed out at him too. We’ve seen women in labour in better moods. The human equivalent of karela, wrote, “Sir you can see it’s not about mentioning Kangana so much, clearly lot of people I have thanked haven’t mentioned her, it’s just that I am tired of people taking digs at her, who is this Taapsee to claim that Kangana needs double filter….(contd) @anuragkashyap72”

We don’t see anyone taking a dig at Kangana. People have their own lives, except Rangoli. She is feeding off the drama that has her sister at the epicentre. Or maybe trying to create her own niche, in the likes of other dramebaaz’s? If that’s the case, she has arrived! We can see the Bigg Boss people watching with interest.

These non Indians who are living off this land, using and abusing its people and its resources, lying about intolerance and spreading hatred, time to think about their agenda and not to get carried away with their provocations. https://t.co/FAwHChqopC

It seems like Rangoli has serious problems with people exercising their freedom of speech. So when Alia Bhatt, tweeted her perspective about a political situation, Rangoli said she doesn’t have the right to have opinions about Indian politics, since she is a British citizen. Soni Razdan decided to clarify, “Urging people to vote against hate has nothing to do with citizenship and everything to do with being a human being. We are all human beings first and citizens of the world we live in. Secularism and democratic principles are values and it’s those that I stand for. #VoteOutHate.” We are so proud of the way this wise woman replied to Rangoli’s rants!

So this happened after Kangana expressed embarrassment over her comparison with Alia. But Alia response was calm and mature. She handled it sportingly. Randeep Hooda, who worked with Alia in one of her initial movies, Highway, extended his support to her. He wrote, “Dearest @aliaa08 I’m so glad you are not letting the opinions of very occasional actors and chronic victims affect you and your work .. kudos to you for your continued efforts to outdo yourself”

But Rangoli went on to get downright disgusting with her words. She called him a chatukar and a “permanent failure”. Randeep’s sense of self is not dependent on your opinion of him. But Rangoli probably feels it does. Such a strong sense of self-importance!

These two pappus had to learn riding for their upcoming love story, they went for one day got so sore never came back again, Kangana fell from horse 3 times after various injuries and invested whole year of hard work to get galloping…(contd) https://t.co/1uZaVjDzLv

(Contd)….and action right on a horse back, this is a proof, pappus can never work as hard as hungry bhukhhad outsiders, abhi tunhari jalti hai toh main kya karoon ?, pls prove me wrong show me one vidoe of pappus galloping ?

The sisters seem to have special hatred for Alia, born out of envy. We mean she has pulled her down, calling her a product of nepotism. But she has definitely proved her acting skills to the entire country. Plus, she is a pleasant person to work with. When Rangoli learnt that Ranbir and Alia gave up learning horse riding for their next film, Brahmastra, she decided to put her judgemental aunty hat on. She went on to call them pappus and also rich-shamed them. We didn’t even know that was a thing until she said, “This is a proof, pappus can never work as hard as hungry bhukhhad outsiders, abhi tumhari jalti hai toh main kya karoon (what can I do if you’re jealous). Please prove me wrong show me one video of pappus galloping.” They may not be as good at horse riding as you or your sister, but they are better at being likeable. And that’s what matters more.

I hear a lot of people like ⁦@RichaChadha⁩ comment about Kangana’s outspokenness, they often insist they choose not to have public war of words. My question is do they have a choice? Are they truly autonomous? …. (contd.) https://t.co/b0l8dWKrTA

Only a person living under a rock would not be aware of the mud-slinging battle between Kangana and Hrithik happening since forever. Now Richa Chadha has no role to play in this, or so she thought. Because when she simply expressed herself on the TV show By Invite Only and said, “If I have a problem with someone, I wouldn’t have a war of words with them on a public platform. This is because I don’t want to say it. Not because I lack the courage. I have the courage and I want to say it sometimes, but I’d say it one-on-one.”

Now, of course, everything has to be about Kangana. Rangoli felt that she was attacked, so she wrote, “I hear a lot of people like @RichaChadha comment about Kangana’s outspokenness, they often insist they choose not to have public war of words. My question is do they have a choice? Are they truly autonomous?.” Is Rangoli autonomous? Or is she just the foul mouth hired by her sister?

ALSO READ: Varun Dhawan Gave A Perfect Response To Rangoli Chandel’s Unnecessary Twitter Taunt. We Believe She Was Being Too Dramatic

Karan not only takes huge percentage of every artist earnings who he launches or works with and sends to Matrix bt also tells them what to wear and who to sleep with, percentage I understand lot f Hollywood production houses do that but always forcing actors to patch up…(contd) https://t.co/NN9HMx3mpA

Now we know how Kangana made KJo sound like the flag-bearer of nepotism in Bollywood. But guess what, Rangoli decided to also go ahead and basically call him the pimp of tinseltown. She wrote on Twitter, “Karan not only takes huge percentage of every artist earnings who he launches or works with and sends to Matrix bt also tells them what to wear and who to sleep with, percentage I understand lot f Hollywood production houses do that but always forcing actors to patch up.” Someone log this woman out.